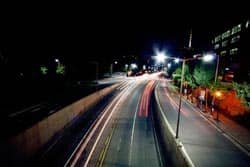 By the end of three years in the Regular Army, I was clear that I was not cut out to be a doctor after all.  My final year in the 121st Evacuation Hospital in Korea had served to provide the answer to that question, but it left me not knowing what to do with my life.  The Army had wanted me to re-enlist and make the Army my career, and had made attractive offers to that end, but I knew that that was not a viable option for me.  What in the world was I going to do?

One night shortly before I was due to leave Korea and the Army (if I was going to leave), I lay on my bunk in my private room above the lab -- the perk for having become the ranking noncommissioned officer in the lab.  As I contemplated the ceiling, and the knotty questions concerning my future, I was aware that a group of Christians who met once a month just outside the military compound were engaged in their very noisy monthly worship service that started on Friday night and continued through to Sunday night.  I had been born and raised in the Episcopal Church (a so-called "cradle Episcopalian") where the Sunday morning service lasted for an hour and decorum reigned supreme.  This enthusiastic style of worship seemed very strange to my ears.

Suddenly, I became aware that the light in my room was increasing dramatically.  Instantly aware that this could not possibly be the work of the single bare bulb hanging from the ceiling, I deduced that the North Koreans and or Chinese were attacking and that this was the first sign of nerve gas.  I jumped up from my bunk to flee, but was stopped by a deep sense of peace, as if someone far bigger and stronger than I were in charge of the situation and was telling me to turn around and pay attention.

Accordingly, I turned and looked back into the room and saw that the light was emanating from a cloud.  This bright cloud was not coming into the room through the air vent.  It was coming through the wall on the other side of which this Christian group was engaged in their prayers.  The cloud was of a golden hue, composed of little particles of light that appeared to be dancing for pure joy.  Fascinated and terrified, awestruck, I watched the cloud approach me as it filled the room.  Then one of those dancing particles of golden light touched me and set off such an explosion of joy within me that I was literally unable to stand.

I fell onto my bunk and lay there, unable to move, as another and yet another of those golden bombs of unutterable joy touched me and exploded within me.  Eventually the thought occurred that if even one more of these divine missiles touched me I would die, because I could not contain that much joy.  Instantly the cloud disappeared, and I was enveloped in such profound Silence as I had never before experienced.  Then God spoke and said to me, "You are my son.  I love you.  I have called you and appointed you to be a priest in my church."

With that I fell into a deep sleep and awoke in the morning refreshed, renewed, and convinced that I had had a psychotic episode! I was an Episcopalian!  No one had ever told me that I could have an actual experience of God.  Besides that, as anyone who has spent time in the Regular Army will understand, I was about as far away from God as you could get and still be alive.  I resolved to tell no one about this strange experience and put the episode out of my mind.  I left Korea and the Army and resumed my studies at the University of Vermont.

When I had been away from home in my previous semester at UVM, and one prior to that at Swarthmore College, I had not attended church.  Nor had I "gone" during my three years in the Army.  I only "went" when I went home.  But after having heard God's voice in Korea, on my first day back at UVM, I located the Episcopal chapel on campus, noting the time of the Sunday service.  I "went" every Sunday from then on.  So natural did this feel to me that it was years later before I came to the realization that God had become so involved in my life that I really had been changed.  One Sunday morning toward the end of my second year back at UVM, the chaplain began his sermon by saying, "I have a confession to make. I'm an atheist." He meant these words to shock. And shock they did!  The moment I heard him make this confession, I heard again the same preternaturally deep Voice that I had heard in Korea, saying to me this time, "There, you see?  You can be a priest, because he's one and he doesn't even believe."