Converting from Christianity to Pagan 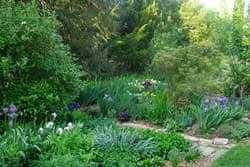 I was raised Christian, but during a very difficult time in my life, I questioned my rigid belief system and found that a different path was more appealing to me. During my study to learn more about other religions, I came across a book by Scott Cunningham titled Wicca: A Guide for the Solitary Practitioner.

At the time, I didn't even know what a solitary practitioner was, much less that I fit the description! I have been a closet prayer warrior all my life. I participated in and lead several prayer and worship groups, but most of my prayer work was alone and usually with candles, gestures, written prayers, meditation, and incense. I danced with flags and banners, and used instruments and homemade tools to make dancing more fun and meaningful. My granddaughter calls it 'fairy dancing.' Yes, I danced, sang, and moved in circles while making verbal petition. No wonder I felt like an outcast in churches that did not honor such activity! Little did I realize how similar my practice of moving of energy is to performing Pagan rituals.

Once I left the Church, I intended to never again have a religious label, but there are enough commonalities with Native American beliefs, Earth-based religions, and feminine-honoring practices that I feel comfortable being associated with these systems.

Unfortunately, there is a stigma within American society that shuns anything that seems anti-Christian -- probably due to fear of the unknown, or a misunderstanding in terminology. While I was in Christian circles, I was taught things about Paganism that are just not true. History clearly indicates how Christianity has adopted many of the practices of Paganism and camouflaged Pagan sabbats and touted them as Christian holidays -- especially Ostara (Easter) and Yule (Christmas).

I should have known my roots were more aligned with earth-centered worship when I gave birth to two children on sabats or traditional days of Wiccan celebration. My son was born on Mabon and my daughter was born almost four years later on Lughnasadh. My brother was born on Beltane. My son married his Wiccan wife on Samhain.

I have always loved gardening -- especially growing vegetables and herbs. My grandmother planted by the 'signs' in the almanac and had a gift of seeing in the spirit realm -- a gift she probably doesn't realize she has much less that she passed on to me. None of these were by accident, I'm sure. The Goddess was trying to get my attention even while I was part of a male-dominant religion.

After honoring the sabbats, full moon, and new moon cycles for several years now, I feel closer to my Creator than ever in my life. The rules and dogma of organized religion actually kept me from living a truthful life of honoring my authentic self. I felt like a fake because I was taught to be more concerned with appearances than with being real. The Christian path served me well for a while, and it serves a purpose in the lives of many people, but the evangelistic nature of needing to believe a certain way in order to avoid hell or judgment, really seems manipulative now that I'm removed from it. Additionally, the teachings of separateness from the Divine conflicts with the teachings of the Bible. And, the Bible, while it may have been inspired, as many sacred texts are, has a proven record of alteration due to governmental influence. These 'adjustments' have caused the text to be misaligned with the character and very nature of Jesus.

Now I better understand and daily practice a mindful awareness of my connection to God/Goddess, people, animals, the Earth, the spirit realm, and all things great and small. The Goddess within me is creating and birthing new ideas to be implemented with insight from my higher connection. The God is my conscious, giving me clarity and intuitive guidance. My garden is a circle of life with clearly marked gates for the four directional corners. There's an altar in the middle where I offer herbs, flowers, wine, and bread as gifts to thank spiritual beings for assisting me in manifesting my desires.

The rituals themselves are fun, but endowed with extremely powerful beings of light who deserve to be honored and respected. I'm seeing things aligning and manifesting quicker than ever. Synchronicity is a regular occurrence since I've learned to direct my prayers with positive intent and without interfering with the will of another person. I am aware that each of us makes choices to assist our souls with spiritual development. There's more love and less judgment in my life, and I've seen miracles: healing, conception, spiritual awakening, and obvious changes as a result of my rituals.