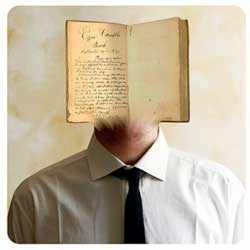 I recently had dinner with an out-of-town friend who is the bishop of his ward. As the conversation turned to the goings-on of friends we have in common, Facebook was inevitably cited as the source of much of our information. My friend sat back in his chair while we waited for dessert.

"You know," he said. "One of the things I've learned as bishop is just how powerful a tool Facebook really is."

I thought it was interesting that Facebook would figure in his realm of spiritual guidance and healing, and so I probed deeper to find out what made him say such a thing.

I wasn't surprised when he mentioned how many inappropriate relationships are sparked by getting in touch with old friends over Facebook's inherently flirtatious and pithy walls. I seem to recall reading an Ensign article from a church leader that warned of reconnecting with old high school flames and cited a rise in these illicit emotional attachments. Facebook can be distinguished from Match.com by the fact that it's free.

But I was more intrigued by the idea of how Facebook figures in our duty, as members of the Church of Jesus Christ of Latter-day Saints, to repent of those things we do wrong. The youngest members of our church learn that there are five significant steps to repenting: First, acknowledge the wrongdoing; second, confess to God; third, ask for forgiveness; fourth, fix any problems caused by the sin; and fifth, never repeat the sin. Implicit in these instructions is the injunction to walk away from the circumstances and people that promoted the sin in the first place, requesting from those we entangled not only forgiveness but the opportunity to start over with a clean slate.

It's hard enough to say "I'm sorry" to one or two people we might have hurt with a snide remark, or to rebuild a family after emotional or sexual infidelity. It seems near impossible to ask and be granted the forgiveness of our 500 closest "friends." Sure, we can post a status update, but texting an "I'm sorry" on our iPhones while waiting for the light to change doesn't really capture the spirit of the repentance process.

In the age of Facebook, can any of us turn our backs on a regrettable past? Can we walk away from the people and places who knew us as one person, and only embrace a hopeful new future? Technically, it is of course possible to go completely dark on Facebook, never to join or to turn off a profile. But in my experience reconnecting with friends over the past three years since I've had my Facebook account, such egregious snubbing of the system prompts its own rumors: "Why isn't so-and-so on Facebook?" "Well, I heard she eloped to Bali and is living in a fishing village..." Who knows if any of it is true, but the gossip grows so big that the Balinese bride would have been better off posting the facts herself.

I am reminded of Elder Jeffrey Holland's exceptional talk from January 2009, "Remember Lot's Wife," in which he encouraged members of the Church to walk away from past regrets and embrace boundless futures. "Such dwelling on past lives, including past mistakes, is not right! It is not the Gospel of Jesus Christ...." Holland relates the story of a young man who was the brunt of school jokes as a youth. As an adult, he moved away from his community and had professional and personal successes. When the man returned to his hometown in his later life, "the same old mindset that had existed before was still there waiting for his return. He was still just old so-and-so, you remember the guy who had this problem, that idiosyncrasy, and did such-and-such and wasn't it all just hilarious.... This man's Paul-like efforts to leave that which was behind and grasp the prize which lay before him was gradually diminished until he died about the way he had lived his youth -- inactive, unhappy, and the brunt of a new generation of jokes."

I have no idea what my childhood friends think of me, seeing the photos of my kids and reading my writing and seeing who else I am friends with. Fortunately, I was never voted "Most Likely to Succeed" or, conversely, "Class Loser" so unlike the boy from Elder Holland's story, I feel little pressure to escape the pigeonholing expectations of my youth. I press forward with our unique Mormon brand of I-am-who-I-am stubbornness but use my Facebook account these days mostly for professional purposes, leaving the door open for the reinvention of myself should I ever need to seize the opportunity.