Demons: According to St. Teresa and St. John of the Cross 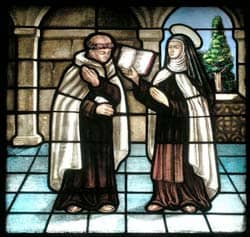 It is not popular in these times to write about demons. As Lucien-Mary of St. Joseph says, "It is doubtless the masterpiece of this master of illusions to pass himself off as nonexistent in a world where he so easily gets souls to go the way he wants, without needing to show himself: He has every interest in not doing so" (Satan, 95). Her observation is similar to Baudelaire's well-known quote to the effect that the devil's cleverest wile is persuading us that he does not exist.

Richard Woods wrote that theological thought has tended to relegate Satan from the center of speculation and preaching. "Perhaps the most strenuous objection to the devil comes not from atheists and psychologists, as might be expected, but from the clergy" (Soundings, 93).  Paul VI, however, in That Evil which Is Called the Devil, says that one of the greatest needs of the church today is to defend against this personalized evil and that it is contrary to the teaching of the Bible and the church to refuse to recognize the existence of such a reality.

Joseph de Tonquedec, S.J., theologian and official exorcist of the diocese of Paris, observes in "Some Aspects of Satan's Activity in this World" that,

It is true to say that while cases of genuine possession are extremely rare, the patients of whom I speak are innumerable. It would not be legitimate to treat them as possessed, for all the evidence goes to show that they are not. On the other hand, they are not invariably or necessarily mental cases, who would have some chance of a cure through psychology (Satan, 40).

The problem of demons is still relevant, and the writings of Teresa and John of the Cross on this subject are illuminating. Both are extraordinary saints and Doctors of the Church who speak of having had innumerable encounters with demons. Both were well-known, especially John, for their powers in exorcising demons. As Teresa asserts, "John of the Cross has a special gift to cast demons... In Avila he cast many from a person, and he commanded them in the name of God to tell him their names, and they obeyed immediately" (Letter 48.2).

Demons, Teresa, John of the Cross

According to Teresa, the devil takes more pains to bring about the downfall of a soul receiving graces from God in prayer than in less-favored souls. This is also the opinion of John of the Cross, who says that the devil accomplishes more through a little harm caused to an advanced soul than great damage to many others.

Like a good captain, a holy soul leads many others to heaven and does the devil much harm. Such a holy soul's special love of God is sufficient to make the devil do his utmost to bring about perdition. The conflict, then, is sterner for such a soul than for one who is less holy.

As soon as the devil began to notice Teresa, she endured the terrible and subtle temptations of despair, false humility, false presumption, and false fears as well as the temptation to abandon mental prayer. These temptations put her soul's peace and love of God at risk.

John of the Cross never refers in his writings to personal external demonic apparitions. Teresa, however, describes in her Life how the devil appeared to her, sometimes having: "An abominable form; his mouth was horrible. Out of his body there seemed to be coming a great flame, which cast no shadow" (Life, 288). On another occasion, she saw a most hideous little devil, snarling as if in despair at having lost what he was trying to gain. She also saw with the eyes of the soul two devils of hideous aspect who seemed to have their horns around a priest's throat while he celebrated Mass. In her Life, Teresa describes how in 1550 she had a vision that carried her spirit to a place in hell.

Teresa discovered that holy water, better than anything else, had the power to expel these external and visible apparitions, noting that theologians agreed with her experience. For example, in our era Tonquedec says that holy water is expressly blessed to keep away from the places and persons on which it is sprinkled "all the power of the enemy and the enemy himself with his apostate angels" (Satan, 50).

These external bodily visions were unusual, even for Teresa, who observes that she could not see anything in the majority of her apparitions of angels and demons. So, her visions of demons were chiefly intellectual visions: "I have seldom seen him in bodily shape, but I have often seen him without any form, as in the kind of vision I have described, in which no form is seen but the object is known to be there" (Life, 292).