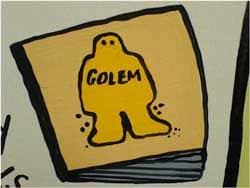 What is the soul? Look for it, and it can't be seen; define it, and it eludes description. And yet, for the ancients, the idea that life could exist without a soul was unimaginable. However, the Talmudic and kabbalistic rabbis did not make a strict distinction between body and soul, either. Unlike, for example, Plato, most Jewish thinkers had a notion of life-energy that was quasi-materialistic. The spiritual world and the material world were interwoven, and actions in one could directly affect the other, for better or for worse.

The Power of Creation

The most important process in the material world, for most of the Kabbalah, is that of creation itself. This, after all, is what God does: creates the world and brings it into being. And it is what humans, in their deepest imitation of God, do as well. Sexuality, reproduction, differentiation, and the bringing forth of life were considered great cosmic mysteries and awesome powers bestowed upon human beings. Spiritual production, too, was important to the kabbalists: A person's deeds create worlds, order the cosmic array, and participate in the divine process of destruction and repair.

That's when all goes right, of course. But what about when the life-energies are misappropriated? What happens when something goes wrong?

The mythic structure of the Kabbalah provided many colorful answers to that question: demons and dybbuks, golems, and ghosts are all the results of misspent life energy. But the Kabbalah does not develop its ideas out of nowhere; they are part of a long history of Jewish speculation about shedim (demons, also a word used to refer to foreign gods) and demonic personalities such as Lilith.

As compared with other ancient Near Eastern texts, in which demons play a central role, the Bible is nearly silent about the existence of supernatural beings. But not the Talmud. The Talmud has a rich, though vague, demonology. Houses of study are described as being filled with demons when sexual energy is not properly channeled. Great rabbis are able to perceive demons sitting on the right and left hands of every person. They are able to harness the divine creative energies to create animals, which can then be consumed for food. And, in the Talmudic world, spirits are everywhere: They haunt dark places, homes, even the crumbs left on the dinner table. For example, consider the omnipresence and omnimalevolence of demons described in the Talmud in Berakhot 6a:

It has been taught: Abba Benjamin says, if the eye had the power to see them, no creature could endure the demons. Abaye says: They are more numerous than we are and they surround us like the ridge around a field. R. Huna says: Every one among us has a thousand on his left hand and ten thousand on his right hand. Raba says: The crushing of the crowd in the Kallah [yearly public] lectures comes from them. Fatigue in the knees comes from them. The wearing out of the clothes of the scholars is due to their rubbing against them. The bruising of the feet comes from them.

Rarely does the Talmudic literature go into detail about exactly how demons and magical creatures come into being, or whether they are really independent beings "out there," or merely psychological realities. If the latter, of course, then we today can perhaps understand this foreign-sounding discourse -- after all, who among us has not been plagued by "demons" in their work or sexual life? As in the source above, "demons" (mazzikim, a word which might be better translated "harmful beings") could be seen as anything that causes decay, pain, and the depletion of life-energy.

But there's reason to think that the text in Berakhot is not referring to metaphorical demons, as it goes on to say, "If one wants to discover them, let him take sifted ashes and sprinkle around his bed, and in the morning he will see something like the footprints of a cock."

Unlike the Talmud, kabbalistic demonology is more detailed. Some demons are formed whenever a man improperly spills his seed -- a sin considered so heinous by the Kabbalah because it subverts the creative process. Other demons are, as in the Christian myth, rebellious angels, or in the case of Lilith, primordial humans who disobeyed the divine plan. In all cases, they are instances of life-energy gone awry. In the proper functioning of the cosmos, energy flows like a cycle: down from heaven, and then back up in the form of proper ritual action. But when the energy is misappropriated, as in masturbation or rebellion, its intense power falls into the realm of shadow.