The Faith and Fate of Jeremy Lin

An Interview with Jeremy Lin 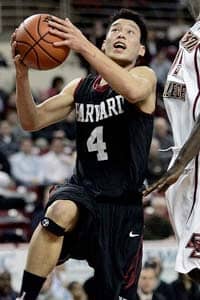 Jeremy Lin was raised in the San Francisco Bay Area, and led his basketball team at Palo Alto High School to the state championships in his senior year.  At Harvard University, Lin has built a national following, has been hailed as one of the finest point guards in the nation, and stands poised to enter the NBA as a high draft pick and the first Asian-American to achieve prominence in the NBA.

Lin is among those receiving the highest number of votes for the Bob Cousy award, given annually to the nation's most effective point guard.  He has been profiled in Time, Sports Illustrated and ESPN: The Magazine, as well as countless basketball magazines and newspapers from the United States to China.

He spoke with Timothy Dalrymple in his dorm room at Harvard University.

Can you tell us about your faith background and how you got into basketball?  Do you think that God called you onto the basketball court?

My faith and my basketball began separately, then slowly converged, and now they influence each other.  But when I first started playing basketball, I was five years old, and my dad put a ball in my hands.  Ever since I was a little kid, I just loved to play this game.  I was always in the gym.  I loved playing.  That's what I did for fun, all the time.

My parents also took me to church ever since I was a little kid.  I grew up in the church, but I didn't really become a Christian until I was a freshman in high school.  That's when the gospel really started to make sense to me and I was ready to give my life to God.

Then, Christianity didn't become a significant part of my approach to basketball until the end of my high school career and into college.  That's when I began to learn what it means to play for the glory of God.  My parents had often talked about it and told me that I should play for God's glory, but I never understood quite what that meant.  That was something that really boggled my mind.  My parents hadn't gone through what I was going through, being an Asian-American basketball player in America.  I thought, "I want to do well for myself and for my team.  How can I possibly give that up and play selflessly for God?"

Slowly, God revealed more to me.  I started learning how to trust in Him, not to focus so much on whether I win or lose but to have faith that God has a perfect plan.  For me to put more of an emphasis on my attitude and the way that I play, rather than my stats or whether we win a championship.  I learned more about a godly work ethic and a godly attitude, in terms of being humble, putting others above yourself, being respectful to refs and opponents.  There are really so many ways you can apply your faith to basketball.

Did you ever think, as a child, that you would be in this place, a top prospect for the NBA, in the running for the Bob Cousy award, given annually to the best point guard in the college game?

I didn't expect to play in college.  Honestly, I didn't know if I was going to be able to play in high school.  I was always one of the smallest guys.  I went into high school at 5'3", 125 pounds, and every day I came home from practice asking my parents if I would grow taller.

So, physically, I was so far behind.  I was just trying to make the varsity team, let alone play in college.  I had no idea what God had in store for me.

That's why everyday, when I wake up and go to practice, I remind myself to be grateful that I have been so blessed.  I could try to take credit for whatever success I've had, but honestly I see my basketball career as a miracle.  That puts things into perspective for me.

Video Question: If your dreams came true, what would your future in the game of basketball look like?