Glorifying God on the Gridiron

An Interview with Ryan Mossakowski 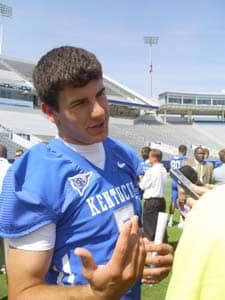 There are many reasons why you rarely find a young man like Ryan Mossakowski.

We've all seen the story.  A child takes to a sport with a breathtaking ease, and with every triumph and every award his confidence becomes cockiness.  A circle of admirers so flatters and fawns over him that he begins to believe he stands at the center of the meaningful world.  Coaches and trainers so covet what his body can do that they leave his soul to languish.

It's the irony of athletic celebrity: for all the adulation of coattail-riders and hangers-on, for all the obsession with his physical abilities, the young man's soul is abandoned to neglect and immaturity.  Untrained, the musculature of the spirit wastes away.  By the time he reaches the elite level of the sport, arrogance and self-indulgence have taken possession of him.  He is unable to humble himself to learn the nuances of the sport, and unwilling to summon the effort required for success at the highest level.  Worst of all, he has learned to worship fame and fortune, and explains away his failures too quickly to learn from them.  He fails to learn what is most important: his inescapable need for a strength greater than his own.

The quarterback position magnifies these problems.  Quarterbacking is complex, technical and cerebral.  Part athlete, part scholar, part field general, the quarterback is almost never the most impressive physical specimen on the field.  Of Montana, Marino, Favre, Brady, and Manning, not a single one has been (by NFL standards) particularly quick or agile or strong.  Among quarterbacks with the most extraordinary athletic abilities, few succeed and many fail in spectacular fashion.  Quarterbacks who reach the pinnacle at their position have to be lifelong learners; they have to make wise and unselfish decisions; they have to trust in their teammates and lead the team.  They have to persevere when everyone around them is giving up.  These things require humility, maturity, patience, and faith.

These are the qualities that make Ryan Mossakowski special.  Mossakowski attracted the attention of national recruiters as he was amassing eye-popping statistics with Centennial High School of Frisco, Texas.  USA Today and Rivals.com ranked him among the top 10 quarterbacks in the country.  In his final three years, even with a senior season cut in half by injury, he threw for 6,834 yards and 49 touchdowns in the pressure cooker of Texas high school football.

Mossakowski has all the physical gifts one could ask for in a quarterback.  A mobile 6'4" and 220 pounds, a professional prospect in baseball as well as football, Mossakowski has sound fundamentals, a strong arm, and precision all over the field.  Yet he is praised by those around him as much for the quality of his character as the rarity of his talent.  "By far," Ryan says, "my faith is the most important part of my life."

Athletes with great talent and great character are not produced by chance.  They are produced by community.  Ryan is the product of a family, a coach, and a church that invested in his faith as much as his talent.

Ryan explained he grew up attending Grace United Methodist Church in Frisco. He attended a small group Bible study hosted by the Fellowship of Christian Athletes.  Together with a best friend, Drew Peters, he met weekly for three years with a Christian mentor named Randy Creach, who helped him grow in his faith.

Yet any football player will tell you that the coach cuts a colossal figure in the mind of a young athlete.  Thankfully for Ryan, Mark Howard became a coach from a sense of Christian calling and seeks to train his athletes spiritually as well as physically.  He hires coaches to be role models and emphasizes that "our priorities in life are God, family, and then everything else."  Howard was most impressed with Ryan's maturity when Ryan returned from college and addressed his former high school team.  Ryan chose to speak of his faith and how it helped him persevere through the shoulder injury he sustained his senior year.  At Kentucky he has joined an Athletes in Action group and recently gave his testimony at Master's Church in Lexington.

Finally, the deepest sources of Ryan's faith, and those who have most deeply invested in his character and his relationship with God, are his parents, Dan and Sally.  The only way to teach your children to put Christ first in their lives, says Dan, is truly to put Christ first in your own life.  This Dan and Sally, though they wrestle with all the same problems other parents face, pray and strive to show their children "how to trust in the Lord and leave all the consequences to him."  Only then, in trusting dependence on the divine, can those children drawn upon a "strength beyond understanding, the strength that comes from God."