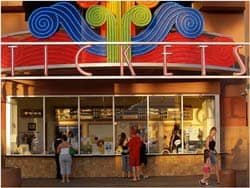 What makes a film Jewish?

There are almost as many definitions as there are film watchers. Some insist a Jewish film must have Jewish characters, actors, filmmakers, or themes. Others believe a distinctly Jewish sensibility is enough. A film's "Jewishness" can be over-the-top or subtle or even that impossible-to-define "I know it when I see it." So it shouldn't be a surprise that when critics and scholars were invited to select their five all-time favorite Jewish films, the answers ranged from old to new, dramatic to humorous, popular to obscure.

Check out the complete list of films that our critics mentioned as important to the history of Jewish cinema here.

This hilarious indie comedy, directed by Michael Roemer, is about a Jewish ex-con who tries to find his way back to normal life after prison, running the gamut of Jewish catered affairs and divorcées in the process.

Directed by the great Carol Reed with a script by Wolf Mankiewicz, this touching film is steeped in details about a Jewish boy's coming of age in London's East End.

It's an outrageous comedy directed by the inimitable Elaine May, from material by Bruce Jay Friedman and Neil Simon, about a Jewish groom on his honeymoon (Charles Grodin) who makes a run for a shiksa goddess (Cybil Shepherd). The dilemma of the Jew drawn to forbidden fruit has never been so brazenly depicted.

Jerry Lewis immortalizes the schizoid split between the nebbishy, brilliant, klutzy Jewish arrested-development manboy and the slick, Sammy Glick-ish hustler-type, Buddy Love. Like a Saul Bellow character, he wants to have it all.

Alan Berliner made a wonderfully honest, probing personal essay-film about his stoical, tight-lipped elderly father, divorced by his show biz-loving mother. The dynamic of this dysfunctional Jewish family will be instantly recognizable.

Phillip Lopate writes about movies for The New York Times, Esquire and Vogue.

One of the funniest movies ever made is Jewish to its core, without once relying on "Jewishness." Mel Brooks combines chutzpah with a sophisticated (Jewish) trust in an audience's ability to laugh at the shocking bad taste of a Hitler musical, and he stirs the pot to an un-gepotchked high boil. This is a movie of Jewish liberation!

Norman Jewison's energetic production is the big-time Hollywood screen adaptation of the world's most accessible pop cultural depiction of Jewish tradition. This movie helped an international audience love us.

Dover Kosashvili's wonderfully naturalistic drama about a Georgian-Jewish bachelor in Israel in love with a divorcée (to his family's disapproval) is the polar opposite of Fiddler: It's strikingly sexual and unvarnished in its exploration of Tradition! Tradition!

The bravest films with a Shoah theme are those that grant characters the dignity of being imperfect whether they live or die. You don't get a Jewish protagonist more imperfect than the forger/concentration camp inmate at the center of this superbly made Austrian movie.

The wealthy Jewish family in this haunting film, by the great neorealist Italian director Vittorio De Sica, is unwilling to see the danger posed by Mussolini's fascist reign.

Lisa Schwarzbaum is a film critic at Entertainment Weekly.