Healed of the Sin of Religion: At Church with Sara Miles

Sara Miles was a journalist and a chef who wandered into a San Francisco church one Sunday, got religion, and stayed to start a food pantry that now feeds 600 families a week. We talked to her recently about her newest book, Jesus Freak: Feeding, Healing, Raising the Dead. 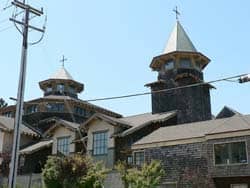 The first time I drove past St. Gregory of Nyssa Episcopal Church in San Francisco's Potrero Hill, I doubled back to take another look at the striking brown-shingled building with its pointed cupolas and massive wooden doors -- directly across the street from a fortress-like brewery.

As it turns out, the juxtaposition of beer factory and house of God is not out of line with the way Sara Miles, now Director of Ministry at St. Gregory's, understands the sacred and the role of church. As she tells it in her memoir Take This Bread: A Radical Conversion, it was an offering of food and drink, communion, that knocked her sideways, led her -- secular, gay, worldly -- to join the welcoming congregation at St. Gregory's, found a food pantry, and get baptized. In that order.

The theology Miles develops in her newest book, Jesus Freak: Feeding, Healing, Raising the Dead, evoked in stories of her own conversion and of the work it led to, is undeniably elegant. It's about bodies: the bodies we live in, or the ones we bump into on the subway, God's body in the Christian liturgy, or the "body" that is a well-functioning church.

We spoke last month about the problem with religion, about the ideas liberals and conservatives share when it comes to "doing good," and about how to distribute eleven tons of free food in two and a half hours.

Your first book was a memoir, the story of how you came to church for the first time, and stayed. But -- and this might be because of your background as a journalist -- you seem less interested in talking about yourself, and more about the context you found yourself in.

Yes, to actually write about myself was not what I planned. What was most interesting to me was the sense that I had walked into the Episcopal church at a very particular historical moment, the moment at which it was flipping from being the center of power to being this marginalized, ridiculed, unimportant institution -- which I think is a great blessing. A huge blessing -- very, very lucky for me.

As I wrote, what was interesting for me as a journalist was the intersection, the class politics of denominational differences. So that people who had been on the outside, the crazy Pentecostal snake handlers, and the suburban evangelicals, those people were coming into power; and the golf-playing, scotch-drinking Episcopalians were losing their grip.

All this other stuff was happening in terms of religion in the United States at the moment when I started going to church -- and that was a story to me that was interesting.

You describe growing up in a determinedly secular household, not going to church at all.

I didn't grow up going to church, though I definitely grew up with the influence of my grandparents, who were very socially active, progressive Christians from the 1920s on. They were part of the ecumenical movement; anti-war, internationalist, civil rights activists -- I have a great photo of one of my grandmothers walking off to jail, holding the hand of a cop as she was being arrested.

But no, I wasn't raised in it at all. When I moved here I didn't know anybody who went to church; San Francisco is apparently the least churchgoing city in America.

In Jesus Freak you write about going around the country, to talk about your work with food pantries, and change in churches, and meeting many people who say something like, "Oh, it's wonderful what you do, but we could never do that here...!"

It's this weird thing. Before I became one, I didn't understand there's this whole industry of church professionals whose job it is to be inspirational.