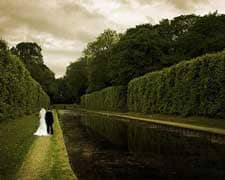 Once upon a time, Hollywood dished up happy endings of wedded bliss, and no one thought to second-guess the couple's future happiness.

Then came the movies of the '60s and '70s, with their tales of adultery, marital dysfunction, and feminist liberation. Tinseltown's happy ending flip-flopped. Characters appeared to gain peace of mind by seeking out relationships unburdened by rigid social conventions (The Graduate, 1967; Bob & Carol & Ted & Alice, 1969; Looking for Mr. Goodbar, 1977) or by going it alone (An Unmarried Woman, 1978; Kramer vs. Kramer, 1979).

We can't entirely blame Hollywood for the doom and gloom regarding matrimony: The divorce rate had shot up, and feminists attacked marriage as an inherently exploitive institution. When I was in college, my friends often donned a T-shirt emblazoned with the feminist aphorism: "A woman needs a man like a fish needs a bicycle."

Now, a slew of recent films celebrating the joys of hearth and home suggest that Hollywood finally may be rethinking its skepticism regarding marriage.

In Julie & Julia, America's foremost actress, Meryl Streep, reveals Julia Child's knack for fine cuisine and matrimony. "Best Picture" nominee The Blind Side offers a compelling portrait of a loving Christian couple who adopt a black football player. The biopic Young Victoria examines the close bond between the young British monarch and her consort, Prince Albert. And Up, the animated feature film and another Oscar contender, recalls an elderly widower's contented union with his late wife.

Where are Gloria Steinem and Betty Friedan when you need them?

A devoted wife who spoils her husband with thoughtful domestic touches, Child is devastated by her inability to bear children. Slowly, she channels some of her boundless energy toward an enthusiastic embrace of French cuisine. That impulse ultimately produces the landmark cookbook Mastering the Art of French Cooking.

Of course, Child's mission is more ambitious than she knows, and the project falters numerous times. But her husband encourages her to persevere, and the couple's travails draw them closer as they move toward middle age.

In contrast, the newly married Julie Powell mostly ignores Eric, her considerate husband. Working at a phone bank by day, she returns home to pursue her own project: cooking every recipe in Mastering the Art of French Cooking within a year. This, too, is not an easy mission. The difference is that Powell, whiny and graceless, lacks Child's generosity of spirit as well as her infectious joie de vivre.

To be fair, there could be a generational shift at work here: Maybe Powell never received the domestic training and personal discipline inculcated in American women of Child's era. Powell calls herself "ADD" in an effort to explain her limitations. But Ephron doesn't try to justify her immaturity. In fact, moviegoers might well conclude that Powell's marriage serves a larger purpose, underscoring the narrow, often self-centered horizon of modern expectations regarding matrimony.

That judgment received a boost when Powell's latest book, Cleave, was published in the wake of the film's release. An exploration of her marriage and her newfound interest in the art of butchery, Cleave graphically catalogues the author's marital infidelity. Julia Child surely would not have committed such a breach -- let alone broadcast anything like it to the world.

The larger point is that Julie & Julia implicitly challenges feminist arguments about the psyche-obliterating elements of old-fashioned married love. In this film, Ephron, one of Hollywood's hippest directors and screenwriters, reveals how a 1950s' marriage provides shelter amid life's travails -- as well as the freedom to meet personal challenges.

A similar theme drives the action in The Blind Side. Based on the true story of a southern white family that adopts a homeless black teenager, Michael Oher (Quinton Aaron) who subsequently becomes a football star, The Blind Side offers an unblinking portrait of a happy family. Leigh Anne Tuohy (Sandra Bullock) and her husband, Sean (Tim McGraw), are loving, prayerful, and generous spouses and parents. Their spiritual and material abundance envelops the newcomer, but never at the cost of his own dignity or identity. In one moving scene, Leigh Anne visits Michael's alienated, drug-addicted mother to humbly ask her blessing before the adoption. The young man embarks on a celebrated football career, but the most striking feature of this story is its lack of skepticism regarding the Tuohy family and their traditional values.