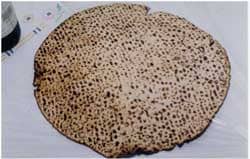 This will tell you everything you need to know to be the hit of the Seder! First of all, let me introduce you to Reb Bahir. Wave at the readers, Reb Bahir. Reb Bahir gives fabulous Seders, and I should know, being his daughter. My tatti (Yiddish for dad) and I are teaming up to walk you through the awesomeness that is Passover. Being a great storyteller, Reb Bahir will talk you through the historical and halachic (law) parts and I (Talia) will talk about traditions.

Talia: Let's start with the story of Passover or Pesach as it is called in Hebrew. (Pronounced sort of like it looks: "Pay-SAH-ch."  The ch is the guttural sound that we all recognize as Hebrew when we hear it.)

Reb Bahir: The children of Israel who had entered Egypt to cheers and fanfare had become slaves.  They were treated cruelly by the Pharaoh and forced into slave labor camps.  As part of Pharaoh's "final solution," newborn boys were killed.  One child, named Moses, survived and was raised in the court of Pharaoh, who was not aware of his origin.  Moses was forced to flee Egypt after killing a taskmaster in defense of a Jewish slave.  While in the country of Midian, he was contacted by God and told that he was going to be the one to lead God's children out of Egypt.  Moses reluctantly approached Pharaoh with God's message "Let my people go!"  Pharaoh would not agree and had to be convinced.  God made Pharaoh an offer he couldn't refuse... ten times... the ten plagues, which culminated in the death of every Egyptian firstborn.  Pharaoh then gave his permission for the Jews to leave, but thought better of it and chased after the Jews to kill them.  The Jews came to the Sea of Reeds (the Red Sea is a sea of a different color...) and God parted the water for them.  When they had crossed and the Egyptians were in the sea, it closed up and they were drowned.

Talia: Pretty morbid. We are aware. Well, here is another holiday where the statement, "They tried to kill us, we survived, let's eat" totally applies.

Reb Bahir: This holiday is unique because as it says in the Haggadah, "In every generation, each person should feel as though he/she were redeemed from Egypt as it is said: ‘You shall tell your children on that day saying, "It is because of what God did for me when I went free out of Egypt.'" For the Holy One redeemed not only our ancestors; God redeemed us with them."  We continue to celebrate this event by being intimately involved in the story re-telling.  We re-experience slavery and move on to freedom every year through the vehicle of Pesach.

Talia: Okay, that makes sense. Some of my clearest childhood memories are the Passover Seder with friends and family. It really seems like a time to connect with each other and with our heritage.

Reb Bahir: Exactly, Talia. So now we have some important mitzvot we must fulfill.

Talia: I think many of us think of mitzvahs as good deeds or doing something nice for someone. How does that relate to the Passover Seder?

Reb Bahir:  On a deeper level Mitzvot are actually commandments. That whole business about the Ten Commandments, well there are actually 613 of them, and they are broken down into positive and negative mitzvot.  If you go deeper into the mystical, Mitzvot means "Sacred Connections," but that is for another time.

Reb Bahir: Right. Can you remember how many are positive and how many negative?

Talia: Well, my advanced degree from the university of Wikipedia tells me that there are 248 positive and 365 negative. What mitzvot do we have on Pesach?

Reb Bahir: There are 12 mitzvot to complete on Passover but here they are combined: