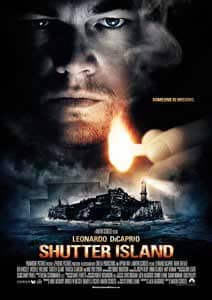 Note: This review deals in part with the conclusion to Shutter Island. While major plot twists are not specifically revealed, there are spoilers. The short and spoiler-free version of this review is as follows: It is an intelligent, challenging, and beautiful film with strong literary content. It is highly recommended for adult audiences.

Film buffs with a particular interest in religious themes in film always look forward to a new movie from master director and devout Catholic Martin Scorsese. Shutter Island, currently in theaters, is the latest product of his practiced and expert hand.

Based on the novel of the same name by Dennis Lehane (2003), Shutter Island is a noir thriller that eschews the contemporary fascination with film noir style as merely style, in favor of using noir sensibility for a very serious -- and very adult -- exploration of a man's inner struggle to discover the truth of who is he. In this haunting film, Scorsese doesn't raise explicitly religious themes. Instead, he confronts his audiences with a profoundly moving allegory of Judgment Day, and the unsettling cry in the dark for salvation.

Shutter Island tells the story of U.S. Marshal Edward "Teddy" Daniels (Leonardo DiCaprio). It's 1954, and Daniels and his new partner Chuck Aule (Mark Ruffalo) are traversing a lurching stretch of Boston Harbor in a small ferry. The men are on their way to Ashcliffe Hospital for the Criminally Insane, located on Shutter Island. A prisoner/patient has inexplicably escaped from her room, and Daniels and Aule are assigned to the investigation.

Daniels, a respected marshal, is a likeable, observant, and very intelligent cop who gets dreadfully seasick. Aule asks Daniels if he's married, and with an understandable reluctance to respond, Daniels confesses that his wife died in an apartment fire several years previously. But it was the smoke that got her, Daniels explains, as if to let Aule know that her suffering had not been too great.

Daniels, like most men his age, is also a veteran of the Second World War. He was with the unit that liberated Dachau, and often suffers flashbacks of the event. He can't forget the bodies, piled higher than a man's head and filling railroad cars, the unblinking eyes of the starved prisoners staring at the American soldiers through barbed wire, his vision of the German guards the infuriated American troops massacred, and the Nazi commander, lying in a pool of his own blood after botching his suicide.  Daniels sees himself kicking away the commander's gun, so the man's death will be slow. Daniels can't forget the God-damned Mahler that the aristocratic Nazi bastard was playing on his gramophone in his lush apartments while thousands of bodies lay frozen outside his window.

The ferry delivers Daniels and Aule to the dock, which is the only way on or off the island. The captain tells them he's leaving immediately, because there is a bad storm coming. The marshals find the hospital's security, staff, and doctors polite but strangely unwilling to help them in their investigation, and soon the lack of cooperation starts to smell like a massive conspiracy to hide what's happening on the island. What is happening here? A frustrated Daniels is ready to hand the case off to the FBI, but the weather is so bad the ferry can't come. The men are trapped on Shutter Island.

Forced to spend the night, the marshals bunk with the orderlies. Daniels has a dream, a sad, sorrowful dream about his dead wife. He awakes in tears, but he's also wet. The roof is leaking, and a hurricane is coming. With nowhere to go, Daniels and Aule resume their investigation. The clues compound, suggesting something too awful to contemplate: cruel experiments on undocumented prisoners funded by the House Un-American Activities Committee and conducted by Nazi doctors smuggled into the U.S. after the war.

Daniels resolves to follow his clues to the end, determined to blow the lid off the secrets of Shutter Island. He's continually warned, by doctors and nervous inmates alike, that the truth may be too awful to bear. Daniels' dreams and flashbacks increasingly connect to his investigation, wreaking emotional havoc on the man as he pursues the truth. The hurricane strikes, the deafening winds and lashing rain an allegory of the awful voice of God at the apocalypse. The hurricane is like a day of judgment.  It is Edward Daniels' Judgment Day.