Keep Your Talk Show Off My Church

A Response to Glenn Beck
By Rebecca J.

Glenn Beck's recent comments on "social justice" stirred up a lot of commentary from all sides. Since Glenn Beck happens to be a Mormon, it is significant that many of his critics were also LDS. Here we reproduce comments from a politically conservative LDS blogger. 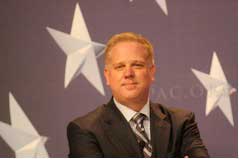 Once upon a time the name "Glenn Beck" didn't mean anything to me.

This is probably because Glenn Beck is a television personality, and I don't watch television. I don't say that in some snobby way like, "Oh, I decided it wasn't worth the cost of cable just so I could watch Antiques Roadshow and the occasional History channel program." No, it's because I find enough on the Internet to amuse and debase myself with, so watching television would be a little gratuitous, wouldn't it? So I have never watched Glenn Beck's program.

But since joining By Common Consent and thereby becoming a fully engaged member of the Mormon blogging community, I have been reminded on a regular basis that a) Glenn Beck is a right-wing nutjob and b) he's a Mormon, and that's just embarrassing. And now I can no longer forget who he is. Thanks a lot, Mormon blogosphere!

So now I know that on his March 2 broadcast Glenn Beck told his listeners/viewers that they should leave their churches if those churches preach a thing called "social justice." According to Beck, "social justice" is code for communism and Nazism. So if you are a red-blooded American who values individual liberty and you hear the words "social justice" uttered at your church, you should start church-shopping right away. (Free markets: they're not just for health care anymore!) Here's an excerpt from what was undoubtedly a long-winded speech:

I'm begging you, your right to religion and freedom to exercise religion and read all of the passages of the Bible as you want to read them and as your church wants to preach them . . . are going to come under the ropes in the next year. If it lasts that long it will be the next year. I beg you, look for the words 'social justice' or ‘economic justice' on your church Web site. If you find it, run as fast as you can. Social justice and economic justice, they are code words. Now, am I advising people to leave their church? Yes!

Now, the biggest reason I never comment on anything Glenn Beck says is that I don't believe in criticizing people (or defending them) without knowing the context of their remarks, and familiarizing myself with the context of Glenn Beck's remarks would require me to actually listen to his show, something I have zero interest in doing. However, when you have Glenn Beck urging folks to leave their churches in the interest of maintaining religious freedom, attention must be paid.

So I listened to an available audio clip, which, frankly, did not make a heck of a lot more sense to me than the quote above did, but it did include Beck's assurance that he would be willing to leave his own church if it started preaching this social justice crap. Well, that's certainly big talk for a Mormon, who is about as likely to hear the words "social justice" from the pulpit as he is a plug for Lucky Strikes. So color me impressed as far as that goes. But ultimately, as a religious conservative, I must denounce Mr. Beck's remarks.

I'm not going to chastise Glenn Beck for opposing church efforts to help poor people because I know that's not what he meant to oppose. Glenn Beck is just one of those folks who consider the phrase "social justice" to be interchangeable with "socialist government." Those folks include many on the left, as well as paranoid right-wing nutjobs. Social justice, while it has its roots in moral theology, is not a term that's often used by religious conservatives because it is so readily associated with left-wing politics, for a good reason. Religious progressives enjoy using the Gospel to promote their political ideals as much as the next person. Secular progressive movements also invoke the concept of social justice. Don't think that just because I used to get Glenn Beck confused with David Archuleta (also a Mormon) that I must be ignorant on all political fronts. The fact remains: if your church advocates social justice, it doesn't necessarily follow that it's a Communist plot.