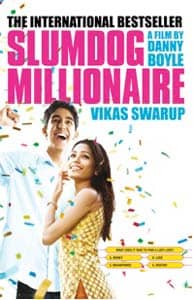 The British-made Slumdog Millionaire is a film executive's dream. Made on a budget of a million and a half dollars, it has grossed Fox Searchlight more than a hundred and thirty million, was nominated for ten Oscars (including Best Picture), and boasts sixty awards from various academies and guilds. European and American audiences have embraced it, though Indian viewers -- in India and abroad -- have had a more ambivalent response.

Some celebrate the film as a long-overdue recognition of Indian cinema, while others found that the attention to Mumbai's slums and underworld merely reinscribes a cartoonish representation of India as a land of poverty and corruption. Some Hindus have complained that the film depicts Hindus as thugs. In an odd bit of related trivia, Mercedes Benz requested that its logo be removed from shots that take place in the slums, lest audiences draw an unsavory association.

At one level the movie is, as noted above, an heroic "rags to riches" narrative -- a feel-good tale about a street kid (a "slum-dog"), who manages to become a contestant on the wildly popular television show, Kaun Banega Crorepati (Who Wants to be a Millionaire?).

I was in India in 2001 during the program's first run, when film icon Amitabh Bachchan sat in the host's chair. All of India, it seemed, was watching. Indeed, as my wife and I ate dinner in a New Delhi restaurant, the show was broadcast to customers from four walls of TVs. Diners stopped eating, interrupted conversations, and stared at the screens as the contestants struggled to answer questions. Amitabh Bachchan had far more star power in India than Regis Philbin did in America; and a crore (10,000,000 Rupees) is a lot more money relative to the Indian economy than a million dollars is in America. Bachchan was huge; the show was huge.

What is it about this film, with a seemingly random set of game show trivia questions at its center, that has captured our imagination? Why now? And, what does Slumdog Millionaire have to do with religion?

The film begins with a question, typed onto the screen:
Jamal Malik is one question away from winning twenty million Rupees.

How did he do it?

The right answer turns out to be the theological frame for the story.

The twists and turns of the plot, propelled by the answers Jamal gives on the game show -- too complex to summarize here -- move Jamal, his brother Salim, and the orphan girl Latika through moments of separation and unlikely reunions as they grow into adulthood. What remains constant throughout is Jamal's devotion to Latika. She is his destiny.

The film closes triumphantly with the couple, at the end of a marvelous vintage Bollywood dance sequence in the Victoria Terminus, embracing and walking down the platform as the screen fades to white light followed by the text: "It is written."

Religion -- explicit religion, that is -- has only a cameo with Jamal, Salim, and Latika's Muslim identities being only incidental to the story. Only once, late in the film, do we see Salim in prayer asking divine forgiveness for a sin he is about to commit; earlier, when a gang of Hindu thugs overrun a group of women washing clothes, a young boy appears dressed as the Hindu god Rama.

There does seem to be a theology to the film, however. Embedded in the opening question, as noted above regarding the slum-dog's success, is the question: "How did he do it?" Throughout the movie we are left wondering whether Jamal is a cheat -- the police assume that initially; lucky -- seems plausible; a genius, probably not; or whether "it is written."

As we work our way to the fade-to-white-light finish and the final answer, we become less and less persuaded that randomness, cheating, or even his personal brilliance drives Jamal's story. Dev Patel plays Jamal as a fairly modest, ordinary guy: street-smart and resilient, but not a genius.

Despite the presence of primarily Muslim main characters, there doesn't appear to be a particularly Islamic vision of divine mercy and inscrutability amid the squalor, terror, and glitz of Jamal's life in global Mumbai. Rather, the film evokes the Hindu idea of divine play (lila); Hindu literature is filled with stories of the devotee who triumphs over adversity through unwavering devotion to his or her deity, while the notion of one's life being written or in the hands of destiny is a broadly shared Indian cultural perspective.