Harry Potter and the Torah 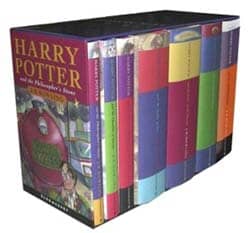 By day he's Dr. Bruce Krulwich, a computer scientist working in Israel's high-tech industry. The rest of the time he's Dov Krulwich, literary-religious sleuth, scouring the Torah, Talmud, and other Jewish texts for connections that link Judaism to the themes and story line of J.K. Rowling's Harry Potter series. Can there be nuggets of Jewish wisdom in a fantasy about a boy who discovers that he's descended from wizards and that the evil wizard Lord Voldemort will stop at nothing to kill him? Yes, and Krulwich -- who, like millions of other parents, was introduced to the series by his children -- uncovers them, and to his delight finds that discussing Harry Potter is a surefire way to get children interested in Jewish teachings. "What surprises me," the author tells Moment editor Nadine Epstein, "is that this is also true for adults. Everybody likes talking about Harry Potter."

Every miracle in the Bible is in essence magical, since it's outside the rules of nature. However, all the supernatural things in the Bible are carrying out God's purpose in the world and aren't just carrying out the desires of magicians.

I think it is important to distinguish religion from fiction and to distinguish religion from magic. When I compare ideas from Harry Potter to ideas from the Torah, readers need to remember that one is fiction and one is fundamental Jewish belief. But comparing the two can help us understand both. I compare magic in Harry Potter to the miracles in the Torah, but religion isn't magic. When saying a blessing we are not saying a magical incantation, we're communicating with God. But communicating with God is our version of supernatural activity.

Why is it that some Orthodox rabbis believe Jewish children shouldn't read Harry Potter?

Some Orthodox rabbis oppose reading Harry Potter out of a concern that it promotes escapism, encouraging kids to think about fantasy instead of the real world. And there are some that are against a book like mine, out of a concern that it denigrates the Torah, treating it like pop fiction. But many Orthodox rabbis support Harry Potter as a way to get kids to read and to think, and are in favor of anything that can help people connect to ideas raised by Judaism.

Harry learns that he is the only known survivor of the killing curse known as Avada Kedavra, one of three curses forbidden in the world of magic. How does this most unforgivable of all curses, relate to Judaism?

The phrase avada kedavra is actually in Aramaic and Hebrew. In Hebrew, the phrase literally means "I will destroy as I speak." It's the only incantation in Harry Potter that isn't based on Greek or Latin.

What's the difference between avada kedavra and abracadabra, which is also from Aramaic?

Is there such a thing as a magic wand in Judaism?

We don't use the term "magic wand" when we translate the Bible, but there are a dozen examples of staffs, sticks or rods that are essentially the same thing, objects used to carry out miracles. Both Moses' and Aaron's staffs were used to perform miracles, once in front of Pharaoh and then to split the sea during the Exodus from Egypt. When the Jews were in the desert, Moses' staff brought water from a rock.

In Hasidic literature, the Baal Shem Tov teaches that before the world was created God had to create the three dimensions, and that a staff represents the creation of the first dimension.

That means that a staff in the Bible represents a link to the power of God. In that sense those miraculous actions were continuations of the power used in the creation of the universe.

Ghosts like Nearly Headless Nick float around at the Hogwarts School of Witchcraft and Wizardry. Do Jews believe in ghosts?