Maintaining Belief When Some Pieces Don't Fit
By Jeff Lindsay 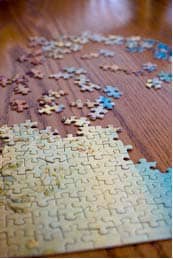 "Cognitive dissonance" is a common buzzword these days for disgruntled Mormons, ex-Mormons, and anti-Mormons. It's a fancy way of saying that there are lingering doubts, puzzles, and intellectual irritants for those who are LDS. Of course, this is true for those of any faith, including atheism, and it's true for any field of knowledge: all the apparent facts, all the stories and allegations, all the experiences and observations cannot be assembled into one smooth, coherent whole. There are always pieces that don't fit or seem to challenge the assumptions that hold other pieces together. The fact that the details of our religion, our scriptures, Church history (in its many forms and with its diverse sources), world history, science, and knowledge in general results in many puzzles and conflicts is somehow supposed to be an intolerable burden that should make intellectually honest Mormons crack and leave the LDS Church.

For many who say they left the Church after suffering with "cognitive dissonance" for years and finally found intellectual satisfaction by rejecting the LDS faith, they based their objections on taking offense at the actions or statements of modern prophets. They are often offended by polygamy, for example. The idea that Joseph Smith or Brigham Young should have multiple wives is something that puzzles me and even bothers me. It's not how I would do things. But as offensive as that practice may be, what basis do I have to reject the Church because of it?

I have the same level of cognitive dissonance over the behavior of Abraham, for example. Good grief, even the biased pro-Abraham record of the Old Testament reports that Abraham was a polygamist who cast out his concubine Hagar and her son, sending them into the wilderness with just a bottle of water where they may well have died had it not been for a miracle. That offends me. And one could easily be sorely offended over Abraham's attempt to sacrifice his son -- can you imagine how the antis would sneer if that experience had been Joseph's and not Abraham's? And then there was the lying to kings about his wife and other incidents.

Based on the information we have, I can honestly say that God and Abraham did not do everything the way I would do if I were in charge, and the discrepancies bother me. But Christ Himself referred to Abraham as His friend, and often referred to the God of Abraham. Abraham was a prophet of God. I can choose to be offended over his marital practices and child-rearing traits and the honesty of some public statements based on my understanding of the story, but my offended sensibilities give me no just grounds for abandoning God and rejecting His messengers.

One ex-Mormon recently wrote that all my info on Book of Mormon evidences really strengthened him for a while, but then he finally cracked under the burden of "cognitive dissonance" from the problem of polygamy. He said all the cool stuff about Book of Mormon evidences doesn't mean a thing now because he is convinced that Joseph Smith was acting poorly regarding polygamy. Now the dissonance is gone. To me, this is a sign of a less active brain rather than a more vigorous one. If the Book of Mormon is not an obvious fraud, then there is a real possibility that Joseph Smith was a prophet -- at least for a moment or two -- and a possibility that our offense at his doctrines, statements, or practices might not be a reflection of some absolute standard of truth, but our own subjective viewpoint. Regardless of one's beliefs, if one finds that dissonance is gone, some part of the brain has shut down.

Sure, there are Mormons who accept things way too readily and don't think carefully about their religion, the scriptures, and so forth. We need to ask questions and not run from truth. If science says something that contradicts our beliefs, we don't need to run from science -- we can explore and question and understand where the conflicts may be.

Don't be surprised that there will be puzzles that we can't resolve -- everything from the age of the earth, the nature of Creation, former priesthood exclusions, polygamy, etc. We do not have all the answers; we only "see through a glass darkly" and have access to only a tiny piece of what God will yet reveal. The anti-Mormons are appalled that we don't crumple at the impact of the first tough anti-Mormon attack that comes our way, and blame it all on sheepish stupidity. But those who honestly seek the truth and have obtained solid testimonies of the Restored Gospel of Jesus Christ know that there are problems and contradictions that must be dealt with in faith and patience for now, just as early Christians did who faced the cognitive dissonance of many "eye-witnesses" who testified that Jesus was a sinner, a corrupt and immoral man, and who testified that the Resurrection was all a fraud. The learned, the educated, the religious leaders of the day, the politicians and popular masses all spoke against Christ -- cognitive dissonance thundered and echoed across the valleys -- yet there were men and women who knew through the power of revelation that Jesus was the Christ.  Some blessed witnesses saw and touched and bore witness that they had seen the glorified Savior, just as we have been blessed to have such witnesses in our era, including those who saw and touched the plates of gold.

I don't fully know why LDS had to have polygamy or even if it was truly necessary. I don't know why Brigham Young did not share all my enlightened views and why he gave some opinions that bother me. I don't know why Gordon B. Hinckley didn't share my views on many issues. And I still can't figure out why the Lord has not elected to do things my way in general -- what a great world this would be then! But all that dissonance is not enough to make me deny what I do know: that the Book of Mormon is a sacred and authentic ancient record translated in our day by a very real but human Prophet of God.