Mormon Culture vs. Mormon Doctrine: Episode 147: What to Wear

Do Mormons have a dress code? Depending on which man-on-the-street you ask, the less-informed might respond that yes, Mormon women wear long skirts with braids and the men black hats or some such funereal garb. The better-informed might stumble on about some modesty standards but conjecture that there is no official uniform.

In truth, Mormons themselves may waffle when asked if we have a dress code. That's because, like quite a few things about our church life, some cultural traditions have been mixed up with doctrinal demands. What is our doctrine? We must be modest, meaning that we must cover those areas of our body that are already covered by our temple garments. What is our culture? Oh, just everything else.

It seems so cut and dried when put in those terms, and yet for Mormons many questions linger. Do men have to wear white shirts to Sacrament Meeting? Do women always have to wear dresses or skirts? The answer to both of these questions is no, but if you were to attend church in a suburban North American congregation, you might be justified in thinking we do.

Our leaders have suggested men wear white shirts to church because it represents the purity of heart we should be feeling when we take the Sacrament in our weekly meeting. Those blessing and passing the Sacrament are especially encouraged to wear white in an effort to replicate the white clothing we wear in our temple worship.

Although he prefers himself in something colored, my husband wears a white shirt because he feels it's an easy way for him to be considered a committed participant. It's a simple statement of his willingness to do what is asked of him. I believe his thinking is that if he's willing to sacrifice something small like his Sunday sartorial preferences, then he'll be willing to sacrifice something bigger that really matters. I think he also doesn't want to get into habits that he'll have to break if he is ever called to be a leader of a congregation himself. We still laugh about the Sunday we arrived at church, eagerly anticipating the calling of a new bishopric, and a friend who had never even worn a tie to church before was fully decked out in a blue suit, white shirt, and conservative tie. We didn't even have to wait for the Stake President's announcement to know who the new bishop was going to be!

As far as I can tell, there is even less direction from the top about women's church attire. The closest we get to an official directive is from the "For the Strength of Youth" pamphlet written for the church's teenagers: "Because the way you dress sends messages about yourself to others and often influences the way you and others act, you should dress in such a way as to bring out the best in yourself and those around you... Immodest clothing includes short shorts, tight pants, and other revealing attire. Young women should refrain from wearing off-the-shoulder, low-cut, or revealing clothes... All should avoid tight fitting or revealing clothes and extremes in clothing and appearance."

For as long as I've been around, this sort of language has been extrapolated to mean that women should only wear skirts or dresses to church. I honestly don't mind this expectation, since in my primary job as mom to three little girls I wear jeans and sweaters during the week and appreciate the opportunity to dress up a bit on Sundays. But there was a time when I was not so eager to toe the line on this point.

Before I had children and was working a corporate job in San Francisco, I would often hop across the Bay Bridge at the end of the workday to attend the Oakland Temple. On one such evening, I was wearing the pantsuit I had worn to work that day: slacks, matching blazer, blouse, and heels. At the entrance to the temple, I held the door open for a middle-aged woman wearing a long denim skirt and Birkenstock sandals with no socks. Smugly, I assured myself that there was no need to be concerned about my elegant but on-the-edge pants.

A few minutes later, I was in the temple matron's office being censured for wearing pants to the House of the Lord. This story is legion and I get hot around the collar when I think about how common it actually is. I ranted and raved about the woman in the denim skirt and Birkenstocks I'd seen in the lobby, about the global expansion of the church and converts who don't even own Western-style dresses. No one, I believed and still do believe, should be made to feel ashamed to come to the temple if their physical condition isn't up to our cultural standard. 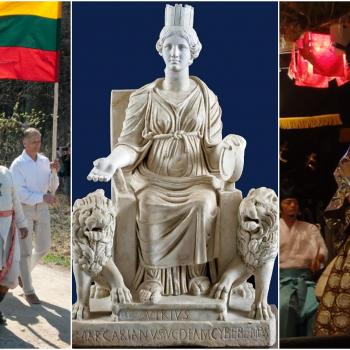 Not One, Not Two: Zen Between the Christians and the Buddhists
James Ford
4

Stairways circle back to where you've been
Fred Clark
Get Patheos Newsletters
Get the latest from Patheos by signing up for our newsletters. Try our 3 most popular, or select from our huge collection of unique and thought-provoking newsletters.
From time to time you will also receive Special Offers from our partners that help us make this content free for you. You can opt out of these offers at any time.
see our full list of newsletters
Editor's picks See all columnists