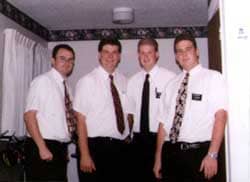 Everyone sees them. Everyone recognizes them -- two young women or clean-shaven men, in suits or dresses, often with backpacks and bikes. Full-time Mormon missionaries currently number nearly 60,000 throughout the world.  Though many are curious, few know much about them.

Before arriving in a mission, many things must happen. Young men between the ages of 19 and 26 and young women older than 21 need to have been faithful Mormons for some time.  The first step in becoming a missionary is a series of interviews with one's local leaders, who ask probing questions about the prospective missionary's beliefs and morality. Health checkups and vaccinations are done to assure that a missionary is mentally and physically up to the task, since missions often involve long walks and biking, as well as the mental and emotional strength to work independently, deal with frequent rejection, etc. Some general questions are asked, such as the capability of learning a foreign language.

If all goes well, the local leaders send paperwork summarizing these outcomes, along with their recommendations, to Church headquarters in Salt Lake City. Once there, one of the Apostles prayerfully considers the needs of current missions, the potential missionary's strengths and weaknesses, and assigns or "calls" them to a mission.

Missions may be geographically large or quite small, and are further subdivided into zones, and each zone into areas. Each area has two missionaries, and each zone may have anywhere from four to thirty or more. Each mission is presided over by a Mission President, who fills this position often at his own cost, with his family, for three years. Except under special circumstances, neither a Mission President nor his missionaries leave the mission boundaries for the duration.

From the time a prospective missionary "sends in his papers" to the time he (most missionaries are young men) receives his mission call, anywhere from a few weeks to several months, is a time of mixed emotions. He puts schooling on hold, leaves behind family members and perhaps a girlfriend, and does not know what languages he will need to learn or in what corner of the world he will spend his next two years. North Dakota? Russia? Thailand? Texas? Poland? The Philippines? Mandarin-speaking in Australia or Los Angeles? Hmong-speaking in Minnesota? Every mission is different, and missionaries have very different experiences based on where they serve.

While many details of LDS missionary life might surprise non-LDS, probably the most important is that missionaries receive no formal training in theology, history, or Greek/Hebrew.  We can posit varied reasons for this. LDS have a lay clergy with no requirement of theological training (which is not to say there are no Mormon Biblical scholars), so why would missionaries be any different? There is the idea of "teach the basics, let the spirit testify of truths," as well as a scriptural tradition of weak things conquering strong. Briefly restated, LDS missionaries do not represent the theological intellectual elite of the Mormon church. Instead, missionaries exist to carry and teach the simple good news, to facilitate conversion.

What of the other side, those who receive Mormon missionaries and undergo conversion? Every story is different, but fundamentally the same. Compare two current experiences here at Patheos, one from Jim F. (now a philosophy professor at BYU) and a lengthier personal recounting from Sam Bhagwat (now a LDS missionary in India.)

Those who join the LDS Church usually go through a process beginning with religious interest and culminating in baptism, confirmation, and integration into the LDS community.  Regardless of whether they initiate that process by having Mormon friends, seeing a spot on TV, or contacting the Church themselves out of interest, at some point LDS missionaries become the primary point of contact, though often Mormons from a local ward will accompany them.

Over a series of informal meetings, missionaries teach the fundamentals of LDS doctrine about God, Jesus, the Bible, the Book of Mormon, etc. They also make clear (not so well, sometimes) what kind of life changes accepting the truth of the gospel entails. Some of these have become cultural hallmarks of Mormonism, such as abstention of alcohol, tobacco, coffee, and tea. Missionaries invite the "investigator" (a cold and disliked term that has taken hold in Mormon culture since no one can come up with anything better that sticks: friend? contact? heathen? Mormon-curious?) to spend plenty of time on his or her own studying and praying and trying to come to a personal spiritual witness of the truth of the message.