Mormon Trinitarianism: Not So Heretical 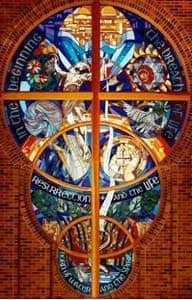 One thing often presented as the main point of difference between Mormons and "traditional Christians" is the doctrine of the Trinity. It is somewhat understandable, given that for more than a century Mormons have attacked the Trinity. Might I suggest that this is incorrect?

The main problem is that both sides in the discussion have straw man understandings of each other. Ask the average Mormon about the Trinity and they'll describe God as a being who has multiple personality disorder. How can one person be three modes? But without giving examples of this misunderstanding let me just say that what most Mormons (and many non-Mormons) describe isn't the Trinity but modalism. Modalism is the idea there is one being with three personalities. The Trinity is the idea that three persons are one God. And modalism is considered a heresy.

The doctrine of the Trinity accepts that there are three separate persons in the Godhead. Yet there is one unity of essence and nature in these three persons.

Now, just as far too many Mormons understand the Trinity as modalism, far too many non-Mormons (and even many Mormons) reduce the Mormon position to tri-theism in a strong sense. That is the idea that Mormons don't only believe in three persons but that there is absolutely nothing in common between them beyond having common aims and values. This seems demonstrably false.

Experiencing God's glory in even a small way is something much different than Neo in the Matrix seeing the Matrix as a computer program. If Mormonism entails something more than what I like to call Neo's eye view then that entails that there is more to the unity of God than just common understanding, values, or intents.

There are plenty of passages that point one in this direction. Read the first dozen verses or so of D&C 88 and say that there is nothing but information and values constituting the unity of the Godhead.

I don't want to bore you providing proof texts here. I just want to suggest that a mainstream LDS position is that there must be a robust unity in the Godhead that is something more than information or values. Once you accept this then you basically have the Trinity. Maybe not an identical understanding of the Trinity but you have three persons with some sort of unity in those three persons that constitutes the essence or substance of the divine.

What I want to suggest is that the main differences between Mormons and mainstream Christians consist not of the theology of the Trinity but creation ex nihilo (creation from nothing). That leads to an absolute and unbridgeable metaphysical difference between God and man. Mainstream Christianity teaches that man must be created in all senses by God whereas Mormons allow that God created man but think that man's essence is as uncreated as God's. There are all sorts of philosophical implications from this doctrine.

The second point of difference is our view of the Father as embodied. Now, there are some Christian theologians who see the Father as embodied, although not the way Mormons do. However these guys (process theologians, for instance) are often seen as outside of the Christian mainstream. Mormons, I think, see God through the prism of Christ. That is, Christ is the revelation of God to us, and all our theology has to be thought through the incarnation of God as the revelation of God. To me that entails that we understand God the Father through Jesus. Therefore the embodiment of God the Father flows naturally. Obviously mainstream Christians don't agree.