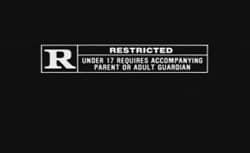 Mormons in the United States have seemingly endless discussions about the appropriateness and value of movies bearing an R rating. Here blogger Scott B. presents a humorous and thorough overview of the contours of this discussion as it has taken place on LDS blogs.

It is time once again for the newer readers of the Bloggernacle to open their notepads and prepare for study. Today, my subject matter is the R-Rated Movie. However, the purpose here is history, not doctrine; therefore, the pros and cons, the virtues and evils, of R-rated movies will not be reviewed.

Although it is not specifically mentioned in some of the seminal Bloggernacle literature, virtually all of the R-rated movie debates in Mormondom are a result of the following quote:

We counsel you, young men, not to pollute your minds with such degrading matter, for the mind through which this filth passes is never the same afterwards. Don't see R-rated movies or vulgar videos or participate in any entertainment that is immoral, suggestive, or pornographic. Don't listen to music that is degrading.  (President Ezra Taft Benson, "To the ‘Youth of the Noble Birthright'" Ensign, May 1986, reporting the proceedings of Priesthood Session, 156th Annual General Conference).

Incidentally, this quote was used as a Friday Firestorm topic in August, 2007, and resulted in 183 responses, including a marvelous contribution from Ray, where he exhorts everyone to avoid turning the thread into a debate about ETB's political views, then debates ETB's political views for several comments, and then apologizes for doing exactly what he told everyone else not to do.

The earliest post I found (admittedly, I didn't get into the smaller solo blogs) that addresses the R-Rated Movie debate is a short-ish posting from Russell Arben Fox in February 2004. This post focuses on a newspaper interview in which BYU Religion Professor Robert Millet said that, while he usually does not watch R-rated films, he would be attending The Passion of the Christ with clergy from various religious organizations. Said Millet, "This isn't Freddy Krueger. This is Jesus Christ."

Nevertheless, RAF's post is also important historically for more than being one of the first posts to address this topic. It also introduces students of the R-Rated Movie debate to Bob Caswell's take on R-Rated movies: "I always love discussing the ‘R' rating even if in some aspects it's been beat to death."