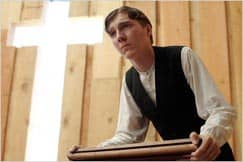 While a variety of reasons could explain this dissonance, two or three stand at the forefront.  First, Catholics as a whole presented a much more unified and visible opposition to Hollywood in the development of the Production Code and other efforts at censorship.  In fact, children in Catholic congregations often pledged allegiance to the Catholic Legion of Decency during mass.  Second, Protestantism never presented nearly as visible or as unified a front in addressing the growing popularity of cinema, though the ways in which they did respond are now the focus of much new research into the field of religion and film.

Protestant reactions ranged from unflinching support of the new medium to outright disgust, often (though not always) ranging along the liberal to conservative spectrum.  Rarely, if ever, have the more conservative, evangelical examples of Protestant ministers been given a fair treatment in Hollywood productions, perhaps a cinematic return fire.  Yet, given post-Vatican II "divisions" within the Catholic Church and the demise of the Production Code, it has become something of a cinematic open season on both Protestant and Catholic ministers.

From the beginning of cinema until now, Hollywood representations of Protestant ministers often fit one of three molds: fanatics, frauds, or faithful shepherds.  This representation, aside from the period of the Production Code, has remained fairly consistent.

One example from the time of the Production Code reveals the temerity with which filmmakers approached their portrayals of ministers.  In Miss Sadie Thompson (1953) (the final of three cinematic adaptations of Somerset Maugham's novel, Rain), the character of the prostitute is changed to a former nightclub singer, and the minister who tries to convert her, but ultimately falls for her, loses any denominational distinction so as not to offend the censors.

Unfortunately, throughout this rocky history, fanatics and frauds far outweigh faithful shepherds in terms of appearances, presenting a rather negative vision of Protestant ministers and denominations to the wider world.

Yet one could argue that Hollywood is not implicitly wrong in presenting these three types, because they do exist.  Moreover, with the advent of cable and accompanying 24-hour news and religious channels, the fanatics and frauds, along with their failings, have become more prevalent in popular culture.  While conservative religious critics often accuse Hollywood of forcing a secular, anti-religious agenda on innocent audiences, Hollywood insiders, both religious and non-religious, vehemently assert that Hollywood's only agenda is to make money.  As we all know too well, sex, violence, and controversy sell, and throughout film history, business has been great!  Audiences (of both news and film) consistently prefer scandal to piety, despite faith-based filmmakers' dreams and intentions.  Ultimately, these audiences are fascinated with these scandalous representations insofar as they mirror the falls from grace that take place in the real world.  I'm still waiting on the movie about Ted Haggard (in fact, I've got an idea for a script if any producers are reading this!).

In the brief discussion that follows, I want to start with more recent examples of each type and work our way back over the history of American film to draw out other examples as well.  As a word of warning and apology, most of the films discussed below feature white men in the role of the minister.  There is a rich history of cinematic representations of African American and female ministers with which I am less versed.  Hopefully other writers can and will contribute to this discussion.

This is perhaps the most prevalent type of Protestant minister in film.  The fanatical minister, so blinded by his (or occasionally her) faith and desire to evangelize, becomes blind to his own sins or oppresses the very people that he hopes to convert.  Most recently, in 2007, There Will Be Blood featured Paul Dano (above) as Eli Sunday, an up-and-coming minister of the Church of the Third Revelation.  He battles with successful oil man Daniel Plainview (Daniel Day-Lewis) for both his soul and for financial contributions to his church.  Sunday is an interesting case because he proves to be a mix of both the fanatic and the fraudulent.  Yet fanatics are nothing new and have haunted the silver screen for decades.