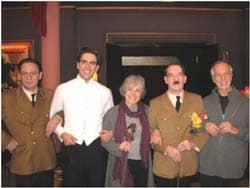 I knew the murder of Adolf Hitler as a fact. I had read the script, been informed by my son Eli that he was going to "shoot Hitler in the face until his head exploded," discussed the murder with the film's director Quentin Tarantino, even watched filming in Berlin on the very stages where Nazi minister Josef Goebbels made his monstrous propaganda films.

What I scarcely expected were the overwhelming feelings that flooded me as I witnessed the scene in the film, Inglourious Basterds.  I watched my son, in his character of "The Bear Jew," machine-gun the Fuhrer's face to a bloody pulp. In that moment, I felt that my beloved boychik was carrying out wishes of mine from my Brownsville, Brooklyn childhood, wild longings from a lifetime of agonizing over the Holocaust. I felt a powerful mixture of rescue, revenge, redemption, relief, and a strange grief. My son was sacrificing himself for all of us. He was doing what I could not. And I cried.

Many friends have told me of similar personal, powerful emotions in response to this film, emotions that were also joyously pleasurable. Yet, I have listened to many post-screening Q-and-As and heard the confused questions of those who are puzzled, distanced by the film because it is "fantasy."

It strikes me that what these questions fail to take into account is that there are two kinds of facts: historical facts and emotional ones. Emotional facts, or feelings, are a condensed, animal form of personal history; expanding them tells the story of one's life. Feelings are just as much reality as facts. Art, similarly, functions as a condensed statement about life. When art resonates with an audience, those emotions are real -- they cannot be dismissed because the story is "historically inaccurate."

Quentin Tarantino understood that it was more important to be emotionally accurate than to follow a story previously written by history. Art must resonate with a truthful emotion inside the viewer in order for it to survive, and, if not, it falls by the wayside, disregarded, and dies a forgotten work. So, where do Inglourious Basterds and my reactions fit into this picture?

At Passover we read of the sages who urge us to tell the tale of the Exodus tirelessly -- one cannot say enough to describe that devastation in the lives of the Hebrews. However, time has laid dust on the tongue's capacity to be fluent in those events. How historically accurate is the story most Jews repeat not once, but twice a year, for some of us even four times, every year of our lives? Reciting the plagues of Egypt is quaintly interesting, but watching Eli turn his armed fury on Hitler in a cinematic oven of burning Nazis is awesome and much closer to my own history.

The Holocaust provides anew an endless capacity to relate Jewish history. I am in my 70s, and all my life I have studied the Holocaust. But I am still startled by the unthought-of newness of stories. I cannot hear enough; it never ends. Inglourious Basterds partakes of the Passover injunction to tell our story. The feelings evoked while watching this film contain our history -- personal and group. The film, though not "factual," represents a psychological reality. This psychological reality is a fact, not empty fantasy. Uncannily, unbidden, a gift-giver, Eli was acting out my dreams, dreams based on my life -- through a film.

Film has the power to capture us through its similarity to dreaming because both are primarily visual. Using images, dreams recast our lives with endless abandon. Feelings in dreams stick closer to actual experience, offering a direct route to understanding mysterious images. When watching Inglourious Basterds, I try to slip into the daring freedom of dreaming. Tarantino encourages us to dream with the fairy-tale words scrawled along the bottom of the screen in the very first frame, "Once upon a time in Nazi-occupied France... " As Plato said: "The good dream of what the bad do."

For me, one of the most interesting debates over the merits of this film occurred while eavesdropping in a cinema men's room. A 14-year-old boy heatedly insisted to his dad that the burning of the Nazis was immoral, against everything he had been brought up to believe. The father just as heatedly told his son that his son did not understand the context; revenge was justifiable in special circumstances. The feelings of each were valid, each based on their own lives, and only different experiences would ever alter those feelings. I, on the other hand, have nurtured a set of feelings for seven decades. I wanted to lean over to the father and son and say, "My son killed Adolf Hitler!" But that's just the Jewish parent in me.

This article was first published at JewishJournal.com, a Patheos Partner, and is reprinted with permission.

Sheldon Roth is a training and supervising psychoanalyst emeritus at the Psychoanalytic Institute of New England, East and was an assistant clinical professor of psychiatry at Harvard Medical School. He is currently retired and lives in Los Angeles.