A Personal Path to Judaism 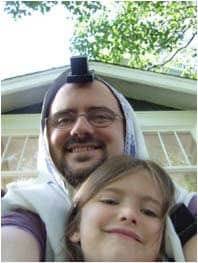 Judaism does not seek out converts, and while those who do convert are taken in with open arms as full members of the Jewish people, the fact is that becoming a Jew can be a long and difficult process.  Jews have understood our tradition to be our own particular path, not one that is required of non-Jews. Indeed, our most important philosophers and theologians, such as Maimonides, have argued that God ordained other paths and the peoples who followed them.

For this reason conversion to Judaism is not like converting to either of its Abrahamic cousins, Christianity and Islam, which have relatively simple conversion procedures one would expect from their more universal focus.  When this orientation was coupled with the fact that converts and their instructing rabbis often faced terrible penalties if discovered by the Christian or Muslim rulers under which they lived, Jews were very wary of being involved in conversions and often discouraged those seeking to become Jewish.  While today many feel that Judaism has much to offer, and while we welcome those who undergo the conversion process, we still do not seek out converts.

My own story provides some insight into how conversion to Judaism takes place in general, some of the difficulties which can arise along the way, and why people choose to become Jewish.

I was raised in a home I would characterize as non-denominational, Pentecostal, evangelical, and quite fundamentalist.  From a young age I was brought up around the Bible, having learned to read with the King James Version when I was a pre-schooler.

During my childhood and adolescent years we did a daily Bible reading schedule through which we read all of the entire Christian Bible from Genesis to Revelation, with Gospels, Psalms, and Proverbs twice.  It is fair to say that I was immersed in the stories found within the Hebrew Bible, and by the age of 5 or 6, I knew more characters in those stories than many adults.

I remember feeling that the New Testament was something I had to know because, well, we were Christian and after all, that was the part that mattered most.  But I remember really being interested in the stories in what I now know as the Hebrew Bible, and as I grew into my teen years I had a very strong interest in the culture and history of the Jewish people, as all of these stories were about them.  I read anything I could find on biblical-era Jewish culture, and I felt somehow deeply connected to these people, as if I belonged to them.  It was a strange feeling because despite some rumored possibly Jewish ancestors, I knew I was of decidedly Teutonic and Celtic ethnicity.  But the feeling of connection remained, and so I kept reading about Judaism, Jewish culture, and Israel as I went through college.

During and immediately after college I found I had a crisis of faith: I realized that I didn't believe anymore in the message of evangelical Christianity.  I tried to return to a fundamentalist expression of the faith in order to drive away the growing doubt, but it became increasingly clear that I could no longer believe in the idea of substitutionary atonement as presented in the story of the passion and resurrection of Jesus Christ.

I tried to continue but was unable to do so after spending several months studying "messianic prophecies" believed by Christians to point to Jesus, only looking at them anew from a Jewish perspective thanks to the work of Rabbi Tovia Singer and the folks at Jews for Judaism.  This was a disconcerting time for me, as I felt simultaneous relief and horror at the paradigm shift I was undergoing.  But ultimately I realized one day that without my belief in Jesus, but with my belief in God and my love of the Hebrew Bible and all things Jewish still intact, I was now free to actually consider conversion to Judaism.

I began my path to Judaism by reading online.  This was easiest for me, as the local Jewish community was Reform and I was not ready to move in such a liberal direction at that time. Additionally the nearest large Jewish community with synagogues and rabbis from across the Jewish spectrum was a three-hour drive away.

I eventually found my way to the website of a group of Sephardi ultra-orthodox Jews in Israel, and I decided to email them.  I began an interesting dialogue with a couple of men involved in the group, and when they recognized that I was pretty serious, they suggested I start reading a book called Kitzur Shulchan Aruch, which is a sort of collection of highlights of Jewish Law, and that I start incorporating elements of practice into my life, and find an Orthodox rabbi to talk to.  I did lots more reading, and then decided that Orthodoxy was probably not going to be possible for me for many reasons, and so I contacted a Conservative rabbi in the larger community described above, and began to attend my local synagogue and study with its rabbi as well.  For the next year and a half or so I regularly attended services, read stacks of books that were part of the formal curriculum my Conservative rabbi used, and met regularly with the local rabbi (a graduate of the Reconstructionist Rabbinical College).  My conversion was completed in June of 2003.