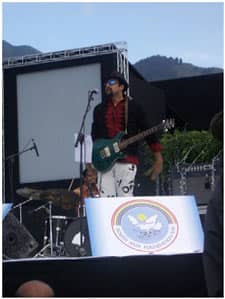 Salman Ahmad, founder of South Asia's most successful rock band Junoon, has been on a rock and roll jihad (struggle) ever since his first concert at 18 -- a medical school talent show in Lahore, Pakistan. Eyes closed, emotions pumped, he was ripping through Van Halen's Eruption on his guitar, mesmerized by the crowd's screams, only to discover that the yelling was coming from a group of bearded students from a religious group outraged by what they considered unIslamic. One tore Salman's guitar from his hands and smashed it on the floor.

From that moment, Salman vowed to fight extremist forces and preserve Pakistan's rich cultural heritage.  For the last 25 years, Salman has been a guitar-wielding ambassador for peace, using his music to dispel misperceptions and promote understanding.  His newly released memoir Rock and Roll Jihad (with Robert Schroeder) chronicles his journey, and provides important lessons on how to tap the potential of cultural personalities to help heal wounds, humanize the "other," and foster respect between the U.S. and the Muslim world.

Salman and I went to Islamic Sunday School together as teenagers.  We would gather around a ping-pong table in Uncle Sultan's basement to read the Quran and learn about Islam.  Salman always had his guitar nearby, using breaks to strum a tune or scribble lyrics.  It was no accident that even then his guitar and his faith were in close proximity.

After seeing his first rock concert at 14 -- Led Zeppelin at Madison Square Garden  -- Salman found his junoon (passion):  he wanted to be a rock star.  He spent his teenage years in New York joining garage bands, going to rock clubs and Beatlefests, and playing his guitar until his fingers bled. His parents had other ideas.

His family moved back to Pakistan so Salman could become a respectable doctor and not, in his parent's view, a low-class musician.  Pakistan had turned into a fundamentalist dictatorship under General Zia ul Haq: gender segregation was state policy; music, song, and dance were considered corrupting influences; and family-oriented TV shows were banned. Salman began his mission: to shine light into this cultural darkness with his music. He started a traveling guitar club and joined his first rock band, Vital Signs, whose hit song "Dil Dil Pakistan" became the national anthem of a new Pakistan.  He founded Junoon and developed a style of music, "Sufi rock," that merged conventional rock with Sufi poetry, the guitar with the tabla -- a fusion of East and West that mirrored his own blended identity as a Pakistani-American-Muslim.

With more than 30 million record sales, Salman went on to become an international rock star -- often called the "Bono of South Asia."  More importantly, he used the power of music to challenge the status quo, bring attention to sensitive issues, and galvanize millions to believe in new ways of thinking.

I experienced it first hand.  Almost thirty years after our Sunday School days, Salman and I met half way around the world, in a place that Led Zeppelin had sung about at the New York concert:  Kashmir.

Madanjeet Singh, founder of the South Asia Foundation, had sought out Salman to perform the first ever rock concert in war-torn Kashmir.  It was a bold move, but Ambassador Singh understands the power of culture to promote peace. The symbolism of a Pakistani band performing in Indian-controlled Kashmir was not lost on any of us.  Especially not the detractors.  Days before the concert an umbrella group of Kashmiri militant organizations had passed a resolution to stop the show.  There were death threats against Salman and his band and anyone who tried to attend.

But on a hot May afternoon in 2008, music blasted through political divisions and guitar riffs silenced the guns.  With the Zabarwan mountains as a backdrop, and the majestic Himalayas and Dal Lake in full view, Salman and his band performed for more than two hours.  Music gave voice to silenced sentiments and breathed hope to new possibilities, as Salman sang meri awaz suno, mujhe azad karo ("hear my voice, give me freedom").

More than ten thousand young Kashmiris -- some in headscarves, others in school uniforms -- sang, danced, waved their arms, and yelled for more.  When Salman started singing "Sayonee" (soul mates), Junoon's most popular song and a huge hit in India, things reached a feverish pitch.  Once wasn't enough. The crowd joined in, drowning out the band:  Chain ek pal nahin, aur koi hal nahin (life is hard, there is not a moment's respite; but we have to go through it, there are no shortcuts).