Taken for a Ride

By Arafat A. Razzaque 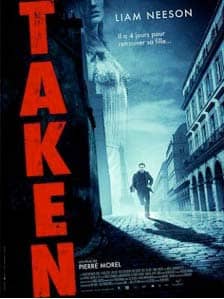 Bryan Mills (played by Liam Neeson) is a former spy for the U.S. government whose 17-year-old daughter, Kim, gets kidnapped (by Muslim men) and sold into sex slavery (to Muslim men) while on a trip abroad in Paris. Bryan immediately heads out to save the daughter in distress, which remains the main point of the story, even as we are treated to scenes depicting the appalling underworld of illegal prostitution. The fate of the many other, non-American women doesn't really matter to Bryan, nor eventually to us, the viewers. Even the one European girl who is taken out and whom we have the fortune of meeting briefly, is no more than a means to an end, for she is able to tell Bryan where she last saw Kim.

This blind spot reveals how the movie is not so much about the problem of sex slavery, but merely a cinema adventure following the travails of the victim-who-matters. Unlike the beautiful and innocent Kim, who has somewhat of a character history (the opening scene shows her father remembering her fifth birthday party), the other women simply fade into the position of anonymous extras: most of them are never even seen, as Bryan opens door after door to find them drugged and draped in blankets in the dark. The individuality of the American girl is thrown into relief against the background of the thus doubly victimized collectivity of all the other invisible women.

Taken is disturbing not just for what it says (or rather, does not say) about non-American women, but also for what it wants to say about non-Western men. Interestingly, although its thoroughly xenophobic portrayal of Muslim men is quite unremarkable (see Jack Shaheen's Reel Bad Arabs), Taken does not represent Muslims as a monolith: they are diverse, yet all bad. The men involved in the trafficking network in Paris are a gang of illegal Albanian immigrants (who, in case you missed their darker, Middle-Eastern features, have a green crescent and star tattooed on their wrists!), whereas the men who eventually purchase Kim are rich, old Arabs with luxury yachts.

Stereotypes are further regurgitated when Bryan finally finds his daughter at a secret auction in the basement of an upscale Paris mansion; she is brought onto the stage covered in a glittering embroidered Oriental piece of cloth and then unveiled, titillating the fantasies of the men in the film as well as those behind the camera, including us, the viewers. Thus, at the same time that Taken attempts to criticize the enslavement of women, it does not neglect the possibility of taking voyeuristic advantage of the situation. As long as they, not us, do the dirty work.

Herein lies the fundamental double bind in the film: the duty to criticize other men for exploiting women, while being unable to fully get rid of our own ugly fantasies and desires to control women. And so Taken is ultimately interesting not even for what it says about Arab or Muslim men, but for what it inadvertently reveals about American masculinity.

The clue lies in the larger narrative that frames Kim's abduction: Bryan initially refuses to grant legal permission to his under-age daughter to travel abroad with her friend. He seems unusually paranoid, insisting that neither Kim nor her mother know what the world is like. Of course, his irrational fears prove correct when Kim and her friend are kidnapped within a few hours of their arrival in Paris. The implicit moral of the story is that man knows what is best for woman, for he really only wishes to protect her. But if anything happens, he is more than prepared to save her and exact his revenge. Determined to find Kim by any means necessary, Bryan goes on a killing spree all over in Paris, and in an utmost demonstration of power, he electrocutes one of the Albanian men to death, even after having already extracted information from him. This one terrifying scene alone manages to embody the twin duo of patriarchy and patriotism, by evoking and enacting both the War on Terror and another legacy of America's grim past, when black men would be lynched for their perceived threat to the sexual purity of white women.

Taken, therefore, constructs Western masculinity by and through demonizing Other men. The point here is not to falsely suggest that there are no Muslims or Arabs involved in the business of enslaving women for prostitution, but rather to interrogate the gendered political ideologies implicit in a popular movie like this. What causes are served by the symbolic identification of the world outside with danger and violence, while evading the very real injustices that exist in our own backyard, or by neglecting the fact that the demand from Western sex tourists often sustain prostitution in many developing countries? How does the articulation of American men as able protectors of their women depend on representations of non-Western men, either as emasculated or as hyper-sexualized and unable to control their animal desires to subjugate women?