Ten Commandments of the Antichrist: The Georgia Guidestones 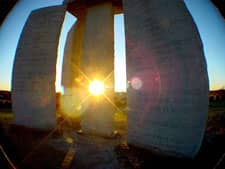 Back in April of 2009, Wired magazine published a story on the history of a strange monument in rural Elberton, Georgia ("granite capital of the world") known as the Georgia Guidestones. The monument consists of four 16-foot-high slabs of granite arranged around a central column and topped with a capstone weighing 25,000 pounds. Carved onto the face of each slab is a list of ten precepts for creating a better society, written in eight modern languages. On the four sides of the capstone are written the words, "Let These Be Guidestones to An Age of Reason" in Sanskrit, Babylonian cuneiform, Classical Greek, and Egyptian hieroglyphs. The central column and capstone are also equipped with holes, astronomically aligned so that the Guidestones can serve as a compass and clock.

The popular consensus is that these stones were meant to survive a global apocalypse and aid survivors in creating a new, enlightened society. Unveiled in 1980, and built by an unknown party, the monument has stood for nearly thirty years outside of town, attracting the curious to Elberton. However, in the last ten years the Guidestones have garnered the attention of conspiracy theorists, who see their message as anti-Christian and a call for a global government. This new reading of the Guidestones ultimately led vandals to deface the monument sometime in December 2008.

The official story of the Guidestones' origin is that Joe Fendley Sr., president of the Elberton Finishing Company, was contacted in 1979 by one "Robert C. Christian" to commission a monument. Christian was a pseudonym used by someone representing "a small group of loyal Americans who believe in God." Fendley has since died, but Randall Sullivan of Wired interviewed Wyatt Martin, the president of Granite City Bank and the only living man who allegedly met Christian. As the project's banker, Martin allegedly learned Christian's true name but will not reveal it. Martin claims he received letters and phone calls from Christian until "around the time of the 9/11 terrorist attacks" and assumes Christian is dead; though some believe Christian never existed. While construction was still underway, Martin and Fendley were accused of perpetuating a hoax, either out of amusement or to promote Fendley's business. Both men took lie detector tests, which they passed. Sullivan suggests that the hoax rumor may have come from rival granite workers.

According to Jim Miles (author of Weird Georgia), shortly after the Guidestones were unveiled, a local minister stated his suspicion that "Mr. Christian is not a Christian" and that the monument was designed for the worship of the sun as well as the devil. Contemporary Pagans, UFO buffs, and New Agers were naturally attracted by the mystery of the site. New myths were created that the monument was built upon a "power-nexus" or a place sacred to Native Americans. One legend holds that visitors who point both arms at the monument (one palm up, one palm down) will receive a psychic message from the stones. Another Guidestone admirer, Yoko Ono, composed a three-movement score entitled "Georgia Stone."

In 2000, Dr. Reagan R. Davis, a Christian minister, visited the stones and concluded that the Guidestones may well describe the ten commandments of the Antichrist. Particularly upsetting were the precepts to "Maintain humanity under 500 million in perpetual balance with nature," "Guide reproduction wisely encouraging fitness and diversity," and "Let all nations rule internally, resolving external disputes in a world court." Davis interpreted these messages as a call for a world government, a policy of state-sponsored eugenics, and the culling of billions of people. This new interpretation elevated the Guidestones from mere local curiosity to the subject of national notoriety among conspiracy theorists and Christian dispensationalists.

Conspiracy buffs were quick to point out the similarities between the pseudonym "R.C. Christian" and Christian Rosenkreuz, the legendary founder of the esoteric Rosicrucian Order. (Documents attributed to Rosenkreuz were signed "Frater C.R.C.") Christians added that The Age of Reason is also the title of a book by Thomas Paine, which challenges the inerrancy of the Bible. Through numerous Web sites and talk radio programs, a narrative eventually emerged in which the Guidestones (along with ancient esoteric societies like the Masons, eugenics, perceived anti-Christian hostility, and globalization) were all part of a single monolithic entity known as the "New World Order."