1 Then all the people of Judah took Uzziah, who was sixteen years old, and made him king in place of his father Amaziah. 2 He was the one who rebuilt Elath and restored it to Judah after Amaziah rested with his fathers.

3 Uzziah was sixteen years old when he became king, and he reigned in Jerusalem fifty-two years. His mother's name was Jecoliah; she was from Jerusalem. 4 He did what was right in the eyes of the LORD, just as his father Amaziah had done. 5 He sought God during the days of Zechariah, who instructed him in the fear of God. As long as he sought the LORD, God gave him success.

9 Uzziah built towers in Jerusalem at the Corner Gate, at the Valley Gate and at the angle of the wall, and he fortified them. 10 He also built towers in the desert and dug many cisterns, because he had much livestock in the foothills and in the plain. He had people working his fields and vineyards in the hills and in the fertile lands, for he loved the soil. 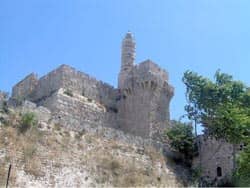 Uzziah's long reign of fifty-two years brought much political stability and economic prosperity. From the world's perspective, he would be deemed a success. Yet, the Chronicler is clear in his criterion for kingship of God's people. After some biographical information, the account states that "he sought God" to describe his personal devotion and worship. Beyond outward success is the less visible, but more important matter of one's heart before the Lord. In this respect, Uzziah's commendation is carefully nuanced. He sought God "during the days of Zechariah" and had success, "as long as he sought the Lord." Uzziah did well when he had a mentor who could keep the fear of the Lord a central focus. The need for mentors is not solely limited to kings. We all need to have someone like Zechariah, who can nurture us toward Christ and keeps us accountable.

Uzziah's military success garnered attention. Like King David, daring exploits brought much fame and allowed Uzziah to secure his borders. Like King Solomon, he embarked upon aggressive building projects (vv. 9-10). Uzziah compares favorably to the two great kings of the United Monarchy. Of all these endeavors, however, the Chronicler makes an intriguing comment about Uzziah's desire to have people work his fields and vineyards because "he loved the soil" (26:10). This uncharacteristically personal comment diverges from the usual descriptions of royal activities. Because of his love for land, Uzziah devoted much energy to agriculture, which subsequently would bless a nation that depended heavily upon this economic foundation. In this way, his personal interests became a source of blessing for others. It is a model for the way in which our personal interests can be employed for the blessing of others.

To whom do you look for advice? Pray for and seek out a spiritual mentor, who can help you to see God better.

What do you love to do? How can you use that desire to advance God's kingdom on earth?

"Even if I knew that tomorrow the world would go to pieces, I would still plant my apple tree." -- attributed to Martin Luther

God, thank you for all the older saints who pass on wisdom to the younger generation. Forgive us for always thinking that newer and faster are better. Instead, grant us the ability to learn with humility from those who have walked further and longer with our Savior. Amen.