Why We Travel: A Spiritual Connection 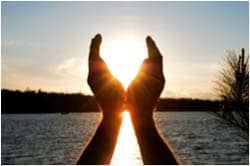 I have no particular religious affiliation, which is why I'm perfectly suited to writing about travel for a sense of spiritual connection. The result of my agnostic upbringing is that I'm open to most any spiritual tradition, and can see the positive elements of compassion, faith, and personal responsibility.

These are some of the places where I have personally felt a strong connection with a presence that I will call the spirit, for want of a better word. Something deeper than ‘awe,' larger than 'sublime,' and more lasting than mere beauty.

In the Presence of Something Greater

The first time I remember being genuinely and literally overwhelmed by the presence of something greater than the landscape, was at the Walls of Jerusalem National Park in Tasmania. (Viator offers a tour to Walls of Jerusalem NP.) This was during one of my few serious bushwalks, so perhaps it was also a tinge of delirium after the five-hour hike up the mountainside (hours of it spent clambering over steep rocks) then hopping across grass patches in the marshy swamp, and finally ascending the sloping hill to the pine forest at the summit.

Reaching the peak just as twilight darkened into evening, and not knowing if we would find the hut, which was our shelter for the night (and also the setting for a trapper's wife suffering incredible isolation in The Tale of Ruby Rose -- watch it for a sense of the grandeur of the landscape) is the closest thing I have felt to a truly ecstatic experience. I found myself lying on the soft springy grass, sobbing, with a sense of being overcome by the presence of such an intense natural power and connection with the earth. We found the hut, and from the mossy stream tasted water that is possibly the clearest I have drunk.

Adjacent to Cradle Mountain National Park, the weather conditions are extremely changeable; it's a trek for experienced bushwalkers and requires a ‘Leave no Trace' approach, so is advisable to follow the guidelines set out by the National Parks and Wildlife Service.

One place that has a sustained and accepted spiritual vibe is the monastery at Montserrat, perched in a stunning position on the dramatically shaped mountains outside Barcelona. (Here is my account of the tour to Montserrat.) The funicular ride to the top was almost enough to make me see a vision, even with my eyes squeezed closed against the nearly perpendicular climb, but this isn't the reason why the Monastery is a bona fide ordained Holy Place.

That was due to a group of shepherd children in A.D. 880, who saw a bright light in the sky above the mountains, heard angels singing, and their hearts filled with joy. The children told their parents, who were skeptical at first but went there and also witnessed the same visions, concluding that they were a sign from God. The cave in which these occurred was visited by the religious elders, who found an image of the Virgin Mary, and hence the Holy Grotto was discovered and became a sanctuary for religious pilgrims. The grotto itself is very beautiful, however this isn't the place where I had an almost-visionary encounter.

The Vortex of Montserrat is a lesser-known aspect of the monastery, although it was much in evidence the day I visited. The ‘Vortex' is marked by a black circular stone set into the ground in front of the cathedral, on which, legend has it, if you stand barefoot and throw your arms into the air, a subtle energetic force will pass through you.

After waiting for the nuns to have their turn, I had to try it, always happy to be barefoot and in contact with esoteric forces. I have to confess that I didn't feel any particular effects then -- although the friend who accompanied me almost had to be left behind in the convent, she was close to a conversion of some kind -- but I have to report that in the following weeks I definitely noticed an increased sense of focus and motivation. This could have been the energy of the vortex, or perhaps the effect of a month spent relaxing in Barcelona over the summer!