Note: Later this year, British director Robin Hardy will release The Wicker Tree, a "reimagination" of the original 1973 The Wicker Man. It is based on his novel, Cowboys for Christ (2006). In light of its imminent release, Philip Coppens' review of the 1973 The Wicker Man is a timely reminder of the presence of paganism in film. 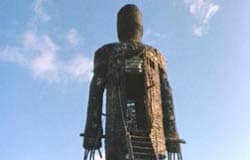 The Wicker Man is a remarkable story of the duality between the Christian and pagan ways, set against a Scottish background. In recent years, the story of the movie itself has been used as an example of the struggle between the old Christian establishment and the reintroduction into Western society of "pagan movies," of which The Wicker Man was one of the most shining examples.

Most film-buffs will know The Wicker Man for an early appearance of Britt Ekland. In essence, it is nothing more than a B-movie, produced in 1973. But over the past thirty-plus years, the film has grown in cult appeal, with film fans debating which cut has what, who made it, why, when, etc. Pub quiz knowledge aside, The Wicker Man is memorable for it depicts a Scottish island, Summerisle, which has returned to the old pagan religion, abandoning Christianity. When its crop of apples fails in the summer of 1972, it lures a Christian policeman to the island to sacrifice him to the solar deity, to appease him, so that the crops will be successful in the summer of 1973.

The Wicker Man began life in 1972 when actor Christopher Lee, Peter Snell (head of the film company British Lion), and writer Anthony Shaffer played with the idea to turn the book Ritual, by David Pinner (1967), into a screenplay. Though the rights were purchased, the book lacked cinematographic impact. An old associate of Shaffer, director Robin Hardy, brainstormed new ideas that in the end would form the framework for the finished movie. The main source that was used to reconstruct the old pagan world was Sir James George Frazer's The Golden Bough, a compendium of the rituals of yesteryears.

The result was the story of a devoutly religious police sergeant who is confronted with the old pagan beliefs of the locals on the Summer Isles, on the west coast of Scotland. Standard pagan imagery is depicted throughout the movie: children at school learn ancient medicine... or should that be sorcery; the religious festivals are those of the Maypole, with children being taught it represents the phallus. The community drinks in The Green Man Inn, while outside, couples have no shame or dance around the fire amidst Stonehenge replicas. Police sergeant Howie might find the scenes he has to witness despicable, but they have transformed Summerisle from a rundown community to a society where apples are grown -- a virtual impossibility in the harsh settings of the Hebridean islands.

The central story is that of police officer Howie, who comes to the Isle of Apples -- Avalon -- in search of the mysterious disappearance of a schoolgirl, Rowan Morrison. Unaware that he is being manipulated by the local population, he eventually learns he has been a fool... and will suffer the fool's fate: he will be sacrificed, in his role as king (representative of the law), fool (which he clearly is), and virgin (he is reserving sexual activity until he is married). In the role of king, he is the substitute of the true power of the islands, Lord Summerisle. Howie himself, now aware of the fate that will befall him, prophesizes that if this year the crops fail again, a substitute will no longer suffice and the king will have to make the final sacrifice himself. That sacrifice is his burning to death, inside the Wicker Man. With his sacrifice to the pagan god, Howie now becomes like Christ, his example, himself: he is sacrificed for the goods of Mankind -- the people of the Earth.

A wicker man was indeed used to offer sacrifices to the gods. The victims were animals and humans, the latter often prisoners taken during wars or convicts found guilty of a crime deserving death. The origin of human sacrifice is almost certainly Caesar's account of the druids in his Gallic Wars. Caesar describes a ritual in which large, compartmentalized wicker effigies were filled with grains, small animals, and even human slaves, before being burned as sacrifices.

The burning of effigies is one of the oldest and most widespread forms of pagan (and indeed human) worship. The burning of flags and effigies of political leaders continue to be seen on our television screens. The burning of a human effigy is intended to create a spirit messenger: the forge a link between the celebrants and the powers that are normally beyond their control. Burning the flag of a country is symbolic of the power that people want to have over the leaders of the country whose flag they burn.  In antiquity, the energy of fire was connected with the sun, the bringer of light, often the image with whom god was identified; for some it was the fire of inner change and transformation, the quest for knowledge and power. Frazier saw the fire festival as a rite of purification, which is largely what the events on Summerisle are: a cleansing, in which the people of the island restate their allegiance to "the powers."