Willing to Be Surprised

Note:  Each week's reflection is intended for communal examination with at least one other person in a small faith, work, or family community as part of the annual six-week ‘retreat' of Lent.  The intent is to notice with freshness our own impact in a community and to name that aloud to others in the community in mutual revelation.  See the introduction to the series, "Tending the Communal Laundry," for more on this approach.

For the next three weeks, we turn to the three ‘scrutinies' that come from John's gospel (cycle A) as part of the annual process of bringing in new catechumens examining their lives with the community they are about to join. 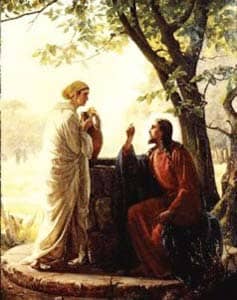 The locked-in, locked-down posturing of the recent health care summit is familiar to anyone who has spent much time in human community, church community included. How does "Yes we can!" morph so quickly into "My way or the highway"?  When the energy of possibility is confused with ‘The Answer.'

The moment of joy realized is like a new baby arriving, and in the first blush of enthusiasm it's hard to fathom the long, sleepless nights, exhaustion, and endless unknowns ahead.  The task is to grow together into an understanding of the gift given and to learn its character. Jesus' approach to the Samaritan woman at the well in John's gospel reveals the stance needed to move beyond gridlock. This Christ is willing to be surprised.

The openness of John's Jesus comes in stark contrast to what he has just left behind.  The small band is walking the road through Samaria on the way home from Judea where the killing field of one-upmanship is rife.  Word has spread -- horror -- that "Jesus is making more disciples than John" (Jn. 4:1).

John is unperturbed, understanding he participates in something greater:   "... my joy has been fulfilled. [The Christ] must increase, but I must decrease" (Jn. 3:29b-30).   He understands that the cycle of letting down and letting in is as natural as the waxing and waning of the moon, when our small selves can get out of the way.

There is a difference between decreasing and diminishment.  Increase and decrease belong to each other, and create an opportunity for growth. Diminishment is the threat to the narrow province of ego that wants triumph once and for all. Its goal is reducing the other while protecting one's own standing.  This is not an environment where Spirit thrives. Permeability to surprise is where life opens afresh, and so Jesus leaves, refusing to participate in the competitions that break community.

On the way, a road-weary Jesus finds himself alone in a Samaritan village where history and habit make the walls seem impenetrable.  Enter simple human need.  Despite the historic enmity between Jews and Samaritans and the strictures against a rabbi engaging a woman in public, this Jesus is unafraid to ask for what he needs: "Give me a drink." He comes simply, human to human. Even more he comes with an open heart, willing to be surprised.  He's permeable. Offense and rejection are real possibilities, but so is contact.  "Look around you," he will soon speak to his astonished disciples, "and see how the fields are ripe for harvesting" (Jn. 4:35).

The woman is either amused or perplexed and unafraid to engage him in return. "How is it that you, a Jew, ask a drink of me, a woman of Samaria?"

He responds by pointing to a larger reality that holds them both, that of reciprocal relationship in the wide open economy of God: "If you knew the gift of God, and who it is that is saying to you, ‘Give me a drink,' you would have asked him, and he would have given you living water."

Will she allow herself to be surprised or will she close off and shut down?  "If you knew the gift of God...! Who's to say I don't?  I have my truth and you have your truth and that's that." End of story.

Instead, she lets herself be touched and engages, although with some prickliness: "Are you greater than our ancestor Jacob?"

Jesus doesn't take the bait, but points again to a larger reality that lies beneath this seemingly everyday conversation -- the thirst for the Living God.  Now she's the one who's thirsty and who lets her need be seen: "Sir, give me this water, so that I may never be thirsty or have to keep coming here to draw water."

One scholar has pointed out that as the conversation develops about the deepest need of her heart and life, Jesus' comment about the woman's many ‘husbands' may point to a deeper Hebrew meaning of the word ‘husband' as a ba'al. It's a way of saying, "You have had five ‘Lords/false gods' in your life-long search for relationship with the Holy, and none have quenched your thirst."  She recognizes truth in what he says and calls him a prophet.