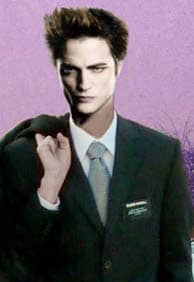 Chastity is the new sexy. There's no question about it really. Millions of Twilight fans spend excessive amounts of productive energy every day squealing and swooning over Robert Pattenson's recent role as the abstinent vampire, Edward Cullen. A quick search online turns up hundreds of fan t-shirts sporting messages from the subtle, "Please Bite Me, Edward!" (with appliqué hearts, mind you) to the overt, "Bun my oven, Edward Cullen."

But really, in vampire lore, there is little symbolic difference between the bite and the bun, so to speak. Vampires as mythological figures have always been fraught with sexual tension. They are able to mesmerize innocent virgins with their hypnotic stare and are constantly in search of a female neck to "kiss." Bram Stoker's Dracula even portrayed the Count's victims as actual vampire wives, implying a none-too-subtle link between his bite and sexual consummation.

He is also, apparently, Mormon.

Or so hundreds of articles and blog posts have claimed ever since it became clear that Twilight was a hit and Meyer was a Mormon herself. Notably, most scholarship linking Twilight to LDS theology has been through analyzing Edward Cullen's sexuality. Caitlin Flanagan's Atlantic article, "What Girls Want" is a particularly well-circulated example. The final say always seems to link Meyers' religion with Edward's chastity. Edward is fiercely abstinent and therefore Edward Cullen's sexuality is Mormon, like Stephanie Meyer. The logic seems to follow: Mormons are chaste. Edward is chaste. Therefore Edward is Mormon.

Of course, any theology in every religion is more complex than a simple premise like "Mormons are chaste." But we depend on Twilight to be some sort of Summa Theologica of LDS sexual doctrine and all its minutia. That one could glean any complete understanding of Mormon theology from Twilight is, of course, completely untrue. For starters, Edward Cullen is not actually Mormon. He's not even generally religious. As far as my own reading of the novels goes, the only explicit references to anything bordering on the purely theological in Twilight are a few conversations about the possible non-existence of Edward's soul. Deep stuff, to be sure, but not really what one might find in a Mormon Sunday service.

The fundamental point is that modern culture currently holds a specific assumption about what "Mormon" sexuality looks like and Edward Cullen has come to represent that assumption. The vampire's sexuality, to simplify, is what makes him Mormon. And now all Mormons, to some extent, are seen as resembling the vampire, Edward Cullen.

This pattern, defining Mormons as vampires based on their sexual stereotype, is an old story.

Mormons have been represented with vampirish motifs since anti-Mormon writer extraordinaire, Winifred Graham, published a series of novels beginning in 1911 about the powers LDS missionaries had to lure innocent English girls into lives of polygamous wifedom. In these books, and in the film Trapped by the Mormons based on them, Mormon men are consistently portrayed with vampire-like powers. They mesmerize their victims with their stares, just as Bram Stoker's Dracula put his prey into a trance before drinking their blood. Mormon missionary kisses are described as, "tak[ing] some immortal part of [a victim] to imprison as his own property," just as stereotypical Victorian vampires would claim their un-dead victims as their own.