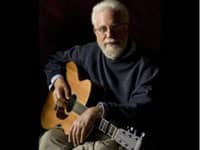 Author of fifteen critically acclaimed books (translated into twelve languages) on Magick and the Occult, Lon Milo DuQuette is one of the most respected and entertaining writers and lecturers in the field of the Western Mystery Traditions. He is also gifted singer songwriter and former Epic Records recording artist whose material continues to inspire and provoke.

Since 1975 he has been a national and international governing officer of Ordo Templi Orientis, one of the most influential magickal societies of the 20th century. He is an internationally recognized authority on tarot and western ceremonial magick. Although he takes these subjects very seriously, he tries not to take himself too seriously. This rare combination of scholarship and humor has earned him in the last twenty years a unique and respected position in American spiritual and esoteric literature.

DuQuette appears often on television and radio as a guest expert on subjects involving the occult. He is a contributor to the Magical Egypt DVD series and hosts the new DVD series, The Great Work.

He is on the faculty of the Omega Institute in Reinbeck New York, and Robert Anton Wilson's Maybe Logic Academy. He lives in Costa Mesa, California with his wife of 42 years, Constance.

With fifteen books on magick and the occult, your duties in the O.T.O., your lectures and appearances as a guest expert on TV and radio, you seem to stay busy. What projects are you currently working on?

I have a new book coming out in November (from Llewellyn) titled Low Magick -- It's All in Your Head, You Just Have No Idea How Big Your Head Is. It's autobiographic and contains stories of magickal operations I've done over the years. The title is a bit tongue-in-cheek, facetiously using the term "Low Magick" to refer to any magickal operation one actual performs rather than those one just talks or argues about.

I'm also finishing up a new book called Ask Baba Lon -- Candid Answers to Questions of Life and Magick. I've been working on this one for over twenty years. It is a collection of letters I've received over the years from magicians (and would-be magicians) and my answers back.  Some are absurd and funny, but most are extremely good questions and observations that required me to really search my soul in order to discover what I really think about these matters.

You've been with the Ordo Templi Orientis for over thirty years and have served as its U.S. Deputy Grand Master since 1996. What initially drew you to the O.T.O., and what do you think is the most interesting aspect of the organization today?

I didn't know it at the time, but there were only five or six members of the O.T.O. (all surviving from Crowley's day) still living when I wrote my first letter of inquiry to the Order back in 1973. I had read a couple things by Aleister Crowley and heard a lot of things (mostly bad) about him, but I just had a feeling that despite his bad reputation this colorful character was a real holy man. As it turns out, the more I discover about him the greater is my conviction that this is true.

In my opinion the most interested aspect of the organization today is the demonstrable success of its mission of perpetuating the works of Aleister Crowley and the propagation of Thelema as a bona fide spiritual philosophy. In addition to this the O.T.O. provides the very real magickal experiences of its various degree initiation ceremonies, something I believe to be among Crowley's greatest magickal rituals.

You're also an Archbishop in the Ecclesia Gnostica Catholica. Can you tell us a little bit about the E.G.C. and its relationship to the O.T.O.?

Ecclesia Gnostica Catholica (E.G.C.) is the ecclesiastical arm of the O.T.O. It is not a separate organization. It is not a separate spiritual entity. This puts us in a similar position as our traditional ancestors, the Knights Templar, who were a military secret society independent of King and Church. They were answerable only to the pope (who seldom questioned anything they did) and they had their own priests, and their own confessors. In other words, like the O.T.O. they had their own church within the Order.

Get used to thinking of the O.T.O. and E.G.C. as the exact same organization viewed with different glasses. Put on your O.T.O. glasses and you see the O.T.O. with our Frater Superior, our Supreme and Holy King or Queen, our Sovereign Grand Inspectors General, our Most Wise Sovereigns, and our Lodge Masters, and members of the various degrees (some of whom have volunteered for extra duties). Put on your church glasses and look at the same thing and you see the E.G.C. with our Sovereign Patriarch or Matriarch, our Presiding Bishop, our Bishops, and our Priestesses and Priests and Deacons.