Beyond 'Just say No!': Sex Ed and Youth Ministry 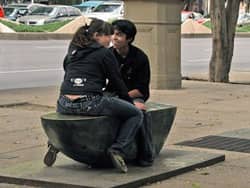 Most of our faith communities are either silent about sexuality or respond with "just say no" to teen sexual behaviors. What does that teach teens? They learn that we are uncomfortable with, unprepared for, and intentionally avoiding addressing their developing sexuality in the context of their faith lives. Regularly, I hear adults say, "If we give them information about sex, that will encourage them to have sex!" First, this assumes youth do not already know about sex (i.e., sexual behaviors). Second, it reinforces an understanding of sexual desire as uncontrollable and adolescents as non-sexual beings until the magic of marriage changes them into mature heterosexual adults. This could not be further from the truth. In fact, the contrary is true.

Effective sexuality education programs encourage and assist youth in delaying sexual intercourse, reducing mature sexual behaviors, and using safer sex practices. In addition, teaching sexuality education in our faith communities allows teens to draw on their core faith values in developing healthy relationships. Parents and guardians have primary responsibility to educate their children on matters of sexuality. Yet, according to the Religions Institute on Sexual Morality Justice and Healing, "Religious institutions serve more teens than any other agency in the community except the public schools, and they are specifically empowered to offer values-based education to children outside of the home." Faith communities have a moral obligation to provide sexuality education.

At minimum, one step to healthy sexual development and postponing mature sexual behaviors is active participation in a faith community. Research shows that youth active in religious institutions engage in sexual intercourse less often than their secular counterparts. (See Faith Matters: Teenagers, Religion and Sexuality, by Steve Clapp, Kristen Leverton Helbert, and Angela Zizak.) Moreover, teens who report significant levels of involvement have the lowest reported rates of sexual intercourse. A number of factors contribute to this. Abstinence was a message that these teens received, but not the only message. Active involvement and support within the congregation are the primary criteria as well as a positive portrayal of sexuality. In addition, these youth reported receiving education on how to make a decision and resources for making that decision. In other words, these teens not only postponed sexual intercourse; they learned about healthy sexuality and "right relationships."

Faith communities who are providing such education are few and far between. Many teens who are religiously committed expect more from their congregations when it comes to sexuality issues. Only four in ten religiously active youth agree that their congregation portrays sex in a healthy and positive manner. Eighty-nine percent of youth report they receive inadequate information on sexual decision-making. Teens need more from us and they want more from us. The good news is that every faith community could take four immediate steps toward assisting youth in developing healthy sexuality and establishing "right" relationships:

Promote a Positive and Holistic View of Sexuality

Most faith communities view sexuality as a "good" gift of our createdness and agree that "Sexuality is a divinely bestowed blessing for expressing love and generating life, for mutual companionship, and pleasure" (Religious Institute on Sexual Morality Justice and Healing). However in many cases, when attempts are made to address sexuality, the overall message of sexuality as a good gift from God is negated by how informational and teaching materials present sexuality. For example, an adult youth advisor in a United Methodist Church reports:

We've used True Love Waits and Focus on the Family materials with our youth. I think the materials are very good in terms of cautioning youth about sex and helping them see the spiritual dimensions to sexuality. But I'm uncomfortable with the role that fear plays in those materials. Are we really preparing youth for the healthy sexual relationships that we want them to have? (Faith Matters, 119)

While an explicit connection is made between sexuality and spirituality, the fear-based language prevents one from describing the connection as good and life-giving. Along the same lines, a male from the Southern Baptist Church writes, "Our pastor and our teachers make me feel like sex is an ugly, dangerous thing. But if that's what it is, why would anyone want to do it?" The hypocrisy of the message that sexuality is a good gift from God, but something to be feared or avoided until that one beautiful day of marriage is not lost on youth. It further confuses them, and turns them away from their faith community as a valid source of moral judgment on issues of sexuality.