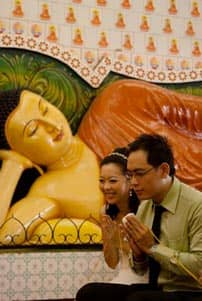 This is an age in which sexual matters are discussed with great openness. There are many who are puzzled to know what the Buddhist attitude toward sex is, and it is therefore to be hoped that the following guidelines may be found helpful toward an understanding. It is, of course, true to say that Buddhism, in keeping with the principle of the Middle Way, would advocate neither extreme puritanism nor extreme permissiveness, but this, as a guiding principle without further specification, may not seem sufficiently helpful for most people.

In the first place, we must distinguish between the rules undertaken by Buddhist monks for their own conduct, and any guiding principles for lay people.

A bhikkhu, or fully-ordained monk in the Theravada tradition, has taken upon himself a set of 227 rules of conduct. The aim of all of these is to enable him to conduct himself in such a way as is most conducive to the attaining of Enlightenment. The rules are voluntarily undertaken, and if a monk feels unable to live up to them, he is free to leave the Order, which is considered much more honorable than hypocritically remaining in the robe while knowingly infringing the rule. There are four basic rules, infringement of which is termed Parajika or "Defeat," and involves irrevocable expulsion from the Order. The only one we are concerned with here is the first, which deals with sexual intercourse.

Complete sexual continence is considered an essential feature of the monastic life. Intercourse of a heterosexual or homosexual character is automatically a Parajika offense. A monk who performs such an act is considered to have expelled himself from the Order, and is no longer in communion with the other monks. Any acts of a sexually unbecoming nature falling short of intercourse result in suspension and require expiation. Samaneras, or novice monks, who break their training in this respect are disrobed.

The same principle applies to the Mahayana schools and of course, to nuns in those schools where they exist. There is no such thing as a "married monk," though in certain schools, especially in Japan, a form of "quasi-monasticism" with married teachers who retain a form of ordination is permitted under certain conditions. But all this has no relevance to the Theravada Sangha.

The third of the Five Precepts undertaken by lay Buddhists runs: Kamesu micchacara veramani sikkhapadam samadiyami, "I undertake the course of training in refraining from wrong-doing in respect of sensuality." Some lay people who, usually for a specified period, undertake more than the usual five precepts, take this one in the stricter form: Abrahmacariya veramani..., which commits them, for the duration of the undertaking, to observe the same restraint as the monks. With these, too, we are not further concerned, as their position is now obvious.

For the average layperson, the Third Precept is on exactly the same footing as the other four. There is, in the Buddhist view, nothing uniquely wicked about sexual offenses or failings. Those inclined to develop a guilt-complex about their sex-life should realize that failure in this respect is neither more, nor, on the other hand, less serious than failure to live up to any other precept. In point of fact, the most difficult precept of all for nearly everybody to live up to is the fourth -- to refrain from all forms of wrong speech (which often includes uncharitable comments on other people's real or alleged sexual failings!).

What precisely, then, does the Third Precept imply for the ordinary lay Buddhist? Firstly, in common with all the other precepts, it is a rule of training. It is not a "commandment" from God, the Buddha, or anyone else saying: "Thou shalt not..." There are no such commandments in Buddhism. It is an undertaking by you to yourself, to do your best to observe a certain type of restraint, because you understand that it is a good thing to do. This must be clearly understood. If you don't think it is a good thing to do, you should not undertake it. If you do think it is a good thing to do, but doubt your ability to keep it, you should do your best, and probably you can get some help and instruction to make it easier. If you feel it is a good thing to attempt to tread the Buddhist path, you may undertake this and the other precepts, with sincerity, in this spirit.

Secondly, what is the scope and purpose of this precept? The word kama means in Pali "sensual desire," which is not exclusively sexual. It is here used in a plural form, which comes close to what is meant by the biblical expression "the lusts of the flesh." Greed for food and other sensual pleasure is also included. Most people who are strongly addicted to sexual indulgence are also much drawn to other sense-pleasures. Though we are here only concerned with the sexual aspect, this point should be noted. For those with any grasp at all of Buddhist principles, the basic reason for such an injunction should be immediately obvious. Our dukkha -- our feeling of frustration and dissatisfaction with life -- is rooted in our desires and cravings. The more these can be brought under control, the less dukkha we shall experience. It is as simple as that. But of course, that which is simple is not necessarily easy.