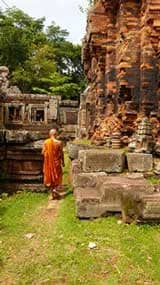 e the vow of poverty and celibacy. The Sanskrit word for celibacy is brahmacharya, "dwelling in Brahman." What do I mean by Brahman? What does "dwelling in" mean and how is it to be practiced? In order to answer these questions, it is necessary to understand the Hindu worldview.  In Hinduism, the ultimate reality is called Brahman. Brahman is neither the name of a person, nor a state to be attained, nor a place to be reached. Literally the word simply means "that which is vast." It is used to denote pure consciousness. Why "pure" consciousness? By that is meant not the consciousness "of" something but "consciousness-itself." Understood thus, Brahman -- or "consciousness-itself" -- is undivided, all pervading, birthless, and deathless.

Our current experience is, of course, vastly different. We see ourselves as just ordinary human beings -- weak, imperfect, and vulnerable to forces outside of ourselves. According to Hindu teachers, this happens because something is obstructing us from getting in touch with our true reality. My true reality is my real Self, it is the "real me," which is different from the ego. Hindus see the ego as a function of the mind. According to them, the mind is still outside -- or is a kind of covering over -- the "real me," which is sometimes called the true Self (to distinguish it from the ego) or the divine Self (to distinguish it from our frail human identity) -- usually the "S" is capitalized in writing.

The Self -- with a capital S -- is the only spiritual part of the human personality. By spiritual I mean non-material. Both the body and the mind are the material parts. That the body is made up of material particles is perhaps easy to understand, but it may sound strange that even the mind is material. Hindus say that the mind is not visible the way the body is because it is made of subtle matter. Our sense organs have limitations and so we cannot see the mind the way we can see the body.

The mind is similar to the body in many ways: both undergo changes for better or worse, both are subject to illness and both have doctors, both get tired and need rest, and both can produce joy and sorrow. The only obvious difference between the two is that one can be seen while the other can only be felt. Hindu thinkers attribute this not to a difference in kind but in degree: they say that both the body and the mind are material, one made of gross matter and the other of subtle matter. Both the body and mind cover -- or, at least, seem to cover -- the spiritual Self, which is why our true identity remains hidden from us.

The goal of life -- or the supreme consummation of life -- is reached when we have a direct experience of our true nature as divine beings, and when we dwell continually in that blessed experience. Those who attain this state are called enlightened: these are the people who are truly in the state of brahmacharya, because they are truly dwelling in Brahman.

The body and the mind limit the full manifestation of our divine nature. It is a big climb-down really: imagine being reduced to a miserable, bound, imperfect, and mortal human being from our original status as the blissful, free, perfect, and immortal divine being. For Hindus, spiritual life is a conscious and voluntary effort to go back to our original state of joy and freedom, pristine purity, and perfection. For this spiritual journey to be successful, every hurdle on the way needs to be overcome and transcended.

Of hurdles and obstacles there will be plenty (as every spiritual seeker can testify), but the root problem is the chronic forgetfulness of our joyful spiritual identity and the amazing attachment to our frail, sorrow-ridden human identity. What make us human are, of course, the human body and the human mind (which includes the intellect and the ego). My human identity is inseparably connected with perceiving my body and mind as "me." Every demand of the body and mind is considered "my" demand -- and in the process, the spiritual Self within is forgotten; my body/mind complex becomes my de facto "self."