Binky Brown and the Virgin Mary
By Beth Davies-Stofka 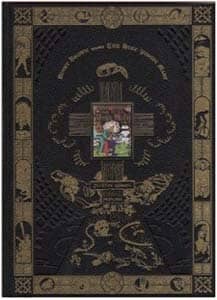 It would be a gross understatement to say that I was looking forward to McSweeney's reissue of Justin Green's landmark 1972 comic Binky Brown Meets the Holy Virgin Mary. Binky Brown, the first autobiographical comic, has not been seen in its full-sized, raw, exposed, and original glory in over thirty years.

The comic recounts the disturbing story of the origins, torments, and ultimate exorcism of the author's sexual neuroses, shaped and fuelled by Catholic indoctrination. The images, which are too graphic to reproduce here, are deeply personal and teeter precariously between pity and humor. The first page alone, a splash page, should be enough to give you a shudder. It shows the author hanging upside down, his bleeding ankles shackled to a pulley. His hands are tied behind his back, his head is bandaged, and his genitals are precariously suspended over a sickle. He creates his comic with his pen in his teeth, the dripping inkwell next to him labeled, "Dad's blood" (his father was Jewish), while a record player on the floor next to him plays a warped recording of "Ave Maria." The style of this particular self-portrait is earthy, muscular, powerful, like one of Goya's "black paintings" done with a masterful comic flourish.

Binky is a young Catholic boy growing up in the American suburbs of the late 1950s. He is consumed by sexual neuroses. As a small child in Catholic school, the nuns, a.k.a. "fascist penguins," train the children to repeat the catechism and submit to the infallibility of the church. Little children drawn as marionettes line up on a stage to recite, "To gain the happiness of heaven we must know, love, and serve God in this world. And even though God knows whether we will go to heaven or hell when we die, we still have the free will to do good or evil." Green writes, "Believe it or burn! (Or maybe, "believe it" and still burn!)"

Young Binky takes the Church's teachings to heart, and begins obsessing on sin and penance. When he reaches puberty, this obsession takes a turn into unimaginable darkness. The boy's first encounters with uncontrollable erections occur while he's praying the rosary at home, or while he's in church, or worst or all, while he's praying the rosary in church. He becomes convinced that he is committing mortal sin upon mortal sin. He can't stay in the church to pray, not with all those erections, and he can't appeal for help to the Virgin Mary, because she is pure. He is reduced to asking God, "Please don't hurt me or my mom." He struggles to keep up with his increasing need for penitential prayer, a sentence he lays on himself in his frantic struggle to keep his family safe from the fires of hell.

The more he struggles, the more uncontrollable his desires become. Poor Binky enters puberty believing that his penis is shooting rays of sinful desire into the world. Pretty soon he is entirely consumed with sin, whether sleeping or awake. Finally he tells God, "I just can't stop these impure thoughts no matter what I do! So -- Go ahead. Kill me! It's no use, my sins just keep adding up! Do it now, while I'm face down. I don't want to die with my penis pointing up towards heaven. Sniff. Maybe I could still make it to purgatory."

God doesn't kill Binky, of course, and so finally Binky runs away from the Church, renouncing Catholicism. Why not? He knows he's damned for eternity. At least, by leaving the Church, he can stop worrying about his constant sinning.

Binky grows up, still emitting his "pecker-rays," and still muttering incantations in an effort to control these destructive manifestations of sexual desire. He no longer mutters Catholic incantations. He now relies on incantations of his own devising. But the root problem remains the same. "Our Lady" still "looms over him," a supernatural reality somewhere out there, his ultimate destiny still the eternal flames.

Until one day, one wonderful day, when Binky has a revelation that puts him on the road to freedom. I'm not going to spoil the end for you. I'd like to allow you to read it, and find out exactly what happened on that frabjous day, the day that Binky "lay the devil down." Let's just say that Binky's final and cathartic ritual of liberation thunders across the panels with a smash and a crash, leaving him to peacefully pick up the pieces.