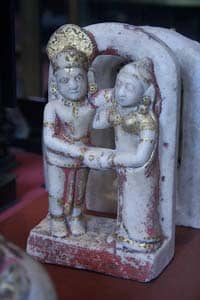 About 38% of Hindu, Jain, and Sikh young adults in America are married to Christians, Jews, or Muslims. Fundamental religious differences can bring unexpected complexities to marriage life. At InterfaithShaadi.org, we work to increase awareness of interfaith complexities and help young adults better prepare for a happy and long lasting married life, even that is an interfaith relationship.

As the former president of a Balvihar, I only regret one point of our collective inaction: though we had taught our kids about our religion, we failed to teach them the practical aspects of interacting with young people from other faiths. In the Western world, it is quite common that young adults date those from other faiths during their college years, therefore it should come as no surprise that about a third of our young generation of Hindus, Jains, Sikhs, and Buddhists marry a person from outside of these Dharmic faith traditions. In almost all cases where a non-Dharmic life partner is selected, the decision is made by our young adults without pre-emptive advice, guidance, or consultation with their parents.

Religious differences could bring complexities in married life, starting with an "unintended" religious conversion of Dharmics and their progeny to the faith of the intended spouse. Further, divorce rates in interfaith marriages are double compared to those within the same faith. For these reasons, it is increasingly important for our young adults to understand potential complications before entering into a serious relationship.

While interfaith relationships should develop based on a mutual respect for religious diversity, sometimes major differences in fundamentals pose difficulties in finding a common ground.

Dharmics carry this tolerant attitude that all faiths help you attain God, and everyone should respect not only their own religion, but other religions as well. But this tolerant attitude is not universal. Many families belonging to Christianity, Islam, and Judaism (Abrahamics) believe in the supremacy of their monotheistic dogma. Their holy books reject what they consider polytheistic beliefs of Dharma. For example, Hindus believe that the Ultimate Reality can be worshiped in many forms (Saguna Brahman), but this recognition and practice is forbidden in Christianity, Judaism, and Islam, and poses a serious issue when it comes to puja or worship (which is considered very bad idol worship by Abrahamics). According to the Ten Commandments: "I am the Lord your God. You shall have no other gods (e.g., Lord Krishna?) before me. You shall not make for yourself an idol, whether in the form of anything that is in heaven above, or that is on the earth beneath, or that is in the water under the earth. You shall not bow down to them or worship them; for I the Lord your God am a jealous God."

Another example: Islam forbids marriage with a non-believer (in Allah). Non-believers are expected to convert to Islam by taking the Shahadah oath, the declaration that there is no God but Allah and Muhammad is his prophet. A similar practice also exists in some Christian sects where there is often intense pressure from family members and the clergy to perform a religious conversion of a Dharmic by baptism before the church wedding. An uninformed Dharmic will only discover the oftentimes unmentioned expectation of religious conversion after years of being in a romantic relationship. At this point, reluctantly accepting the religious conversion may be the only way of averting a marital gridlock.

Religious conversion may be a matter of just a brief ceremony, but do not underestimate this ritual as a trivial matter. Taking this oath will set a tone for your life and your children's lives. You will soon find out that the conversion was not just a matter of satisfying the sentimental obsession of the parents-in-law, but a binding commitment guarded by every member of the new community.

As per the Shahadah oath, you will be forbidden to display an image of Lord Krishna or Lord Ganesh, or any other deity in your own home since associating partners with Allah is the greatest of all sins. Offering prayers or supplications to anyone, living or dead, is an unpardonable sin. Furthermore, attempting to later reclaim you as a Dharmic, even after talaak (divorce), could be seriously punishable by death or life imprisonment by some Middle Eastern countries' laws. Therefore, one should be prepared to accept conversion to a new religion as a serious and irreversible process.