The Disinvitation of Franklin Graham 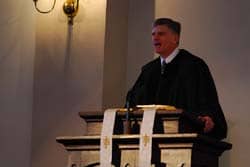 The Rev. Franklin Graham's disinvitation to participate in the Pentagon's observation of the National Day of Prayer offers an example of the damaging consequences of evangelical leaders making insensitive, blanket condemnations of the world's one billion Muslims and their faith. Evangelicals like Graham want to bear witness to the truth of Christianity, but by their comments about Islam they ironically marginalize themselves and hurt the cause of the Christian gospel.

This controversy dates to the days after the terrorist attacks of September 11, 2001, when Graham called Islam a "very evil and wicked religion." Other prominent evangelists such as Pat Robertson and Ted Haggard, understandably outraged by the horror of 9/11, joined the chorus of those denouncing Islam as intrinsically violent. The late Jerry Falwell called the Prophet Muhammad a "terrorist" on 60 Minutes. In probably the most offensive denigration of all, Pastor Jerry Vines, the former head of the Southern Baptist Convention, called Muhammad a "demon-possessed pedophile" in a 2002 speech. Graham has subsequently opined that Islam, in its authentic form, encourages violence and the abuse of women. In a recent Fox and Friends television interview (conducted in response to reports that Graham might be disinvited), Graham said that he wanted Muslims to know that they don't "have to die in a car bomb" to go to heaven.

It is no surprise that military officials would rescind their invitation to Graham for these kinds of comments. If we are going to have a national day of prayer, it can't be for condemning particular religions (or hosting those who do so), but for positive observance that recognizes the importance of prayer and faith in our nation's history. While the government certainly may proclaim days of prayer (the federal recent court ruling against it notwithstanding), it cannot show favor to certain faiths over others. Graham's comments require his exclusion from such events.

Graham's defenders -- most notably Sarah Palin -- have argued that this is another instance of politically correct secularists censoring a minister of the gospel. But is Graham really furthering the gospel, which is ostensibly his purpose in portraying Islam as inexorably violent? I have no doubt that faithfully proclaiming the Christian message is Reverend Graham's sincere desire. And when Graham declares that Muslims can find hope and salvation through Jesus, he is on indisputably solid ground as a minister -- this is the time-honored message of the Christian gospel, and if he is ostracized for saying it, so be it.

But this gospel is not what got him disinvited from the Pentagon; it was his anti-Muslim statements. Must he say these things, come what may, for the sake of Christ? I don't think so -- indeed, the Christian mandate of charity and truthfulness should forbid it. The vast majority of Muslims does not endorse, and certainly does not practice, terroristic violence. Do Graham's comments make it more or less likely that individual Muslims will give a hearing to Graham's gospel? The answer to this question is obvious: evangelism by insult does not work.

Sadly, Graham is just one in a long line of American evangelical leaders, dating back to the early colonial period, who have made such negative statements about Islam. Is it any wonder that Muslims have proven among the most resistant of any non-Christian people to Christianity, despite two hundred years of American missionary overtures to them? I am reminded of a group of Southern Baptist missionaries who wrote an open, anonymous letter to Graham, Jerry Vines, and other leaders in 2003, after Vines's infamous "demon-possessed pedophile" comment. The missionaries pleaded with American-based leaders, who presumably do not have to work with Muslims on a day-to-day basis, to temper their comments and focus on the Christian gospel. "We are not sure if you are aware," they said, "of the ramifications that comments that malign Islam and Muhammad have."

The answer to Muslim-Christian conflict is not to paper over the real theological differences between the two religions, or to cheerily assert that both paths lead to God. This is not what traditional Muslims or Christians believe, and it is not evident that religious relativism is capturing the hearts of the growing world communities of Christianity and Islam. Instead, as best we can, evangelical Christians should refuse to traffic in rude, gratuitous attacks on Muslims' faith. If leaders such as Graham continue to make such comments, the price to pay could be much heavier than a rescinded invitation to the National Day of Prayer. These comments cultivate continued bitterness and misunderstanding between Christians and Muslims, and for evangelicals, they could result in the loss of an opportunity to testify convincingly about Christ.

Thomas S. Kidd is the author of American Christians and Islam and God of Liberty: A Religious History of the American Revolution (forthcoming). He teaches history and is Senior Fellow of the Institute for Studies of Religion at Baylor University.