Doubly Damned: On Talking to Kids about Sex 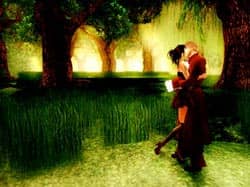 Many of the writers here at The Pagan and the Pen are not only pagan, but also writing in the erotica genre. In terms of our scope for being disapproved of, this really is a double whammy.

Now add in being a parent.

Mainstream culture still equates innocence with ignorance and steadfastly clings to the notion that children are non-sexual beings (which isn't so, many children form their sexual identities, preferences, etc. young). Exposing children to human nudity (at, for example, pagan camps, some allow it) is seen by some folk as tantamount to child abuse. Mainstream culture happily bombards young folk with sexual images in advertising, but still frowns on talking to them about it in any kind of meaningful ways. Pop music is frequently rife with innuendo, but we've all heard the stories about intelligent books being banned, and difficulties on teaching responsible lessons on sex and relationship in classrooms.

I love that fact that paganism doesn't treat sex as dirty, shameful, or sinful. To us, it's a natural, spiritual, beautiful thing that should be celebrated. We write about it with enthusiasm. At the same time, we inhabit the world where fear dominates. Collectively as a species, we are very afraid when it comes to children. The laws of the land I live in seem increasingly inclined to wrap them in cotton wool, limit their access to adults, deny them the learning experiences that come from taking risk, and make sure they are in no way equipped to deal with the adult world.

Children need to learn in supportive environments, where questions can be answered and fears assuaged. I remember having my innocence ‘protected' by people who withheld information, and how terrified I was by the idea of things so horrendous that no one would talk to me about them. Ignorance is not the same as innocence, and most certainly is not bliss.

My philosophy has always been that if a child is old enough to ask a question, he or she is old enough to need an answer. You have to pitch it at a level they can understand. Smart kids who learn about nature figure out a lot about reproduction, and they do it early. My son knows a few of the technical issues, and is relaxed about them. No longer frightened if he finds a spot of blood in the bathroom. No longer confused about where life comes from. It's better that way, I think.

He has also asked about what I write. Sometimes I write non-erotica things I can share with him -- so I do. He knows there are things that I won't share with him yet because he's not ready for them, and currently he's happy to accept that as an answer. One day, he will ask me why, and I will try and explain in a way that makes sense to him. I know people who would be horrified by this and accuse me of corruption, being irresponsible, a bad parent, a bad person. Perfectly aware that if I wrote murder mysteries, no one would make anything of it.

I think the more afraid we become on behalf of the young humans, the more risk we run of harming them. We teach them that fear. Yes, there are terrible things in the world, but we can't protect our children from those things by pretending they don't exist. Nor can we keep them safe by overprotecting them, because they won't learn the life skills they need for adulthood. Ignorance only serves to breed fear and reinforce it. Treat them like small people as much as you can, not like a separate species. Let them learn and grow at their own pace. Don't try and protect them from everything. Life is to be lived, and risk is part of life. Sex, after all, is what got them here, and they have an interest in understanding themselves. Respect them, give them truth when they need it.

And so I am pagan, parent, and writer of erotica, and not at all ashamed of that combination.

This article was originally published on The Pagan and the Pen and is reprinted with permission.

Bryn Colvin writes erotica for loveyoudivine, web comic scripts for It Is a Circle, and blogs for The Pagan and the Pen She's a druid and volunteer for The Druid Network, a folk club organizer, busker, and coffee addict.