Ending Up Where You Began: Still Jewish 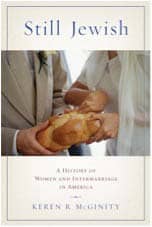 In the early 1970s, as connections to its immigrant past were waning, the Jewish American community faced a dilemma. Jews were enjoying an increasingly comfortable position in American society, but declining synagogue attendance and sharply rising rates of intermarriage sparked concern about the future of Jewry.

With these fears in mind, a 1973 New York Times article reported on a seminar on "The Role of Jewish Women in Strengthening the Jewish Family." Assuming the centrality of the family to preserving Judaism, seminar participants agreed that Jewish women were "the fixative that binds the core together." Their view was that the family was threatened by lower birth rates, higher levels of divorce, and intermarriage rates that had climbed from 6 percent in 1965 to almost 32 percent by 1970.

What had changed among Jews and in American culture? In an otherwise increasingly confident Jewish community, what did intermarriage signify? These are the central questions of Keren McGinity's Still Jewish. Using historical sources and interviews with 46 women -- educated, middle class, liberal -- in the greater Boston area, McGinity, a postdoctoral fellow at University of Michigan's Frankel Center for Judaic Studies and an intermarried Jew herself, parses the nuances of why Jewish women have married out of the fold and the meaning of Jewish identity today. She also details how the mass media and major Jewish religious disciplines portrayed intermarriage as dangerous -- and how that initially uncompromising view changed.

Still Jewish divides the 20th century into three eras (1900-1930, 1930-1960, and 1960-2000) that encapsulate the shifting patterns of Jewish assimilation. Initially an insular population, with an intermarriage rate of only 2 percent, only one out of two Jews married other Jews by the end of the 20th century. Freed from the confines of Eastern European Jewish life, American Jews looked less to Deuteronomy 7:1-3 ("You shall not intermarry with them: do not give your daughters to their sons or take their daughters away for your sons") and more toward a secular, pluralistic notion of marriage.

McGinity first explores the early 20th-century marriages of writers Mary Antin and Rose Pastor and political activist Anna Strunsky, who "reveled in American ideals of freedom of choice" and married gentile husbands with whom they shared strong intellectual and political principles. It was not just these women's prominence that made their marriages so different. Religious authorities publicly disapproved of their marriages as far beyond Jewish tradition. Both the Orthodox and Conservative rabbinate condemned intermarriage outright. And although some Reform rabbis suggested that the movement should consider welcoming interfaith couples, in 1947 the Central Conference of American Rabbis reaffirmed its opposition to intermarriage.

All the same, Jews were coming into closer contact with other Americans. Young Jewish women, in particular, were joining the workforce and pursuing higher education in rapidly increasing numbers. With that wider exposure came greater contact with anti-Semitism. To many of McGinity's interviewees, the subtle pressures of religious bias, combined with Jewish religious establishment warnings against intermarriage, colored their attitudes toward Judaism and may have led them to reject their backgrounds.

In what McGinity deems a transitional period, 1930 to 1960, marriage between Jewish women and gentile men was rare; intermarriage was much more likely between Jewish men and gentile women, perhaps a testament to the role of Jewish women in maintaining Jewish traditions. For those women who did marry gentile men, sustaining their Jewish identity was a struggle. As Hettie Jones (née Cohen) told the author, "I was haunted by the problem of remaining a Jew, but I didn't know how to reinvent a Jewish woman who wasn't a Jewish wife."

Not until the 1960s did the tide turn. Jewish women began to maintain a tighter grip on their Jewish identity within mixed marriages. McGinity links this increased self-assurance to the influence of the counter-culture as well as the feminist movement. Jewish women felt more ease identifying openly as Jews and ensuring their children be reared as Jews, in striking contrast to Jewish men with gentile wives, whose children more often than not had little if any connection to Judaism.

When in 1990, a National Jewish Population Survey found that 52 percent of all American Jews had intermarried between 1981 and 1990, Jewish attitudes began to change. Although still institutionally opposed to intermarriage, Reform rabbis were allowed to use their own discretion about marrying interfaith couples and even the Orthodox Rabbinical Council sought ways "to attract intermarried couples into the Jewish fold."