Faith Amidst the Battle

What about soldiers who are not chaplains? Does anyone come to mind as a soldier who was strong in his faith and who drew on his strength in the theater of war?

Quite a lot of soldiers come to mind, actually, but there's one young soldier who particularly stood out. His name was Nils Thompson. He was very religious. A good kid. Always upbeat. Energetic, but courageous. Everyone looked to him as an example. He was not the steely-eyed-killer type.  He was a good man, and he was just doing his job. He had a strong moral base; he wasn't there to kill Muslims, he was just there to do his duty.

He was killed by a sniper in August 2005. He was shot in the head in Mosul. I don't know what his platoon was doing when he got hit. I was with the commander and we were nearby. It wasn't heavy combat. It was the normal, day-to-day patrol in Mosul where you try to find the enemy or let them find you so that you fight each other. A sniper hit him, and killed him, and we came to where it happened and tried to find the sniper. We never found him.

I talked with his mother afterward. His whole family was a family of faith. He stands out in my mind not because he was killed, but because, even though he was young, he stood out as a good example. Unfortunately he was lost.

You know as well as anyone that soldiers often face extraordinary physical, emotional, and psychological pressures. Have you seen soldiers turn to their faith in their attempts to respond to these things?

Well, this is one of the major times in your life when you would turn to faith. Really, some of the stresses the soldiers face out there are incredible. Although it's not a huge war on a historical scale, the troops who are fighting it sometimes face combat seven days a week. So, on the very broad scale, it's a small war. But for the people who are fighting, it can be very intense. So, the soldiers definitely benefit from any kind of moral leadership. Strong, faith-based leadership is crucial.

Soldiers of faith respond to the pressures with prayer. Some soldiers will pray before going on a mission. Some units huddle up and pray together before going on missions.

I've been on a few missions lately with chaplains. On one of them, a mission in which we might have faced combat, the chaplain brought everyone together for a prayer. I think that's a good thing. It gets people in the right frame of mind. This is serious. Everyone knows it's serious. But there's a reason why we're doing it, and we need to remember the reason we're here.

We often hear that evangelicalism dominates the military, especially at the military academies.  Is this true overseas?

Since they're coming from all over the world, as you know, they're going to belong to different denominations and completely different religions. There are Muslims, Jews, Buddhists, and everything in between.

There has been concern in the American media about a blending of the military and the religious. They talk about the danger of framing conflicts in religious terms, or of putting Bible verses on rifles, and so forth. Do you get a sense of an us-versus-them mentality when it comes to a largely Christian American military and a largely Muslim population around them?

Only on occasion. In the earlier part of the war, it might have looked more like a religious war. But once you've been here on the ground for a while, you realize that many of the people we fight in Iraq and Afghanistan are not motivated by religion at all. Even in the Taliban, which of course is a religious organization, many are not fighting for religious purposes. Their motivations are mixed.

I don't see many United States soldiers who are here on some kind of Crusade. Sometimes you'll hear people say, "These damn Muslims are causing so many problems." And you have to look around and recognize there is some truth to the claim that so many of our enemies are Muslim right now. But at the same time you have to recognize that not all Muslims are our enemies. And religion is not the reason why a lot of Muslims are fighting against us. Here in Afghanistan, for instance, a lot of the fighting has to do with money, and a lot has to do with the drug trade. People kill each other for all kinds of reasons. 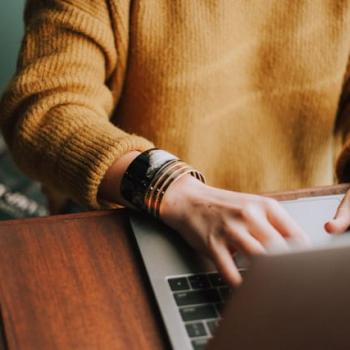 Running Your Business to the Glory of God
Randy Alcorn
2

Put The "Fun" Back in Your Marriage
Shaunti Feldhahn
Get Patheos Newsletters
Get the latest from Patheos by signing up for our newsletters. Try our 3 most popular, or select from our huge collection of unique and thought-provoking newsletters.
From time to time you will also receive Special Offers from our partners that help us make this content free for you. You can opt out of these offers at any time.
see our full list of newsletters
Editor's picks See all columnists