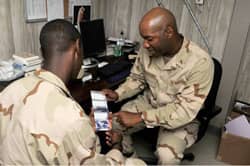 Lieutenant Anthony T. Carr served over eight years as a United Methodist Minister, and over six years in active duty with the United States Navy Chaplain Corps. Recently he volunteered to minister to the men and women who serve at Guantanamo Bay, Cuba, where some of the world's most infamous terrorists are held in military detention.

He was interviewed by Timothy Dalrymple.

Why did you volunteer to serve at Gitmo? And what was it like when you first arrived?

I was working at Navy Recruit Training Command in Great Lakes, Illinois, and they needed a chaplain for Guantanamo Bay. I volunteered because I thought it would be an interesting adventure. I really thought it would be a difficult place to work as a guard, so I wanted to minister to them. I had a lot of misconceptions about Guantanamo Bay. My perceptions had been shaped by the media. I decided that no matter the location, my role as a chaplain would be the same: to provide spiritual support to the sailors around me.

It took me three months to prepare. I went through security and medical screenings and put my belongings into storage. I trained for a week in Gulfport, Mississippi, and a week later I was in Cuba. I left Illinois in the middle of winter, in January, but the temperature was in the 90s when I first arrived on the island. It was incredible. I was briefed further, I got into housing, and throughout the first week I learned from the chaplain I was replacing.

Now that you have had a chance to settle into a routine, what does your ministry at Gitmo look like? Where do you devote your efforts and energies?

I devote most of my time to visiting guards in their workspaces, to counseling, and to providing worship services on the weekends. I've been here for three months now. I'm trying to build relationships with the guards so that they will feel free to talk to me when issues come up in their lives. I advise the command on how to improve guard morale. I also help with religious accommodation issues during the High Holy Days for different faith groups.

Do Christians leave their faith behind them when they go to a place like Gitmo, or do they continue to practice, struggle with, and live out their faith within that context?

Many young people in their twenties are still struggling with the role of faith in their lives. The guards work long hours and interact with detainees who can be hostile and uncooperative. They have a lot of questions about God and their role in Gitmo. The gospel calls us to love our enemies -- and yet these soldiers are confronted with people who would kill them if they had the chance. Being here can certainly spark a crisis in faith.

Some sailors are very faithful to worship when their schedules permit. Some slack off since they are away from home. We provide them with devotional materials and Bibles to help them seek out spiritual life.

What are the faith-related issues that Christian guards at Gitmo typically wrestle with?

Sailors wrestle the most with how they can be good spouses and parents when they are so far away from their families at home. Yet there are other struggles. Some struggle with the question of whether Christians and Muslims actually worship the same God.

Still others are figuring out how God wants them to behave in difficult situations. Guards are sometimes assaulted by detainees who throw feces and bodily fluids at them. The guards have to turn the other cheek and walk away. Doing the right thing, even when you are wronged, takes an amazing amount of self-discipline, moral fortitude, and military bearing. I am amazed at the level of professionalism shown by soldiers half my age. I question whether I would respond as well as they do.

We are not allowed to discuss religion with the detainees at all. Most of the tension comes either from the simple fact of being detained or else from the ideological differences that separate our cultures. Yet the detainees are provided with art and English classes and books in their native languages; they're able to watch sports, Middle Eastern news programs, and even movies. They can also get Korans, prayer rugs, beads, and other resources to help them express their faith.  I think most of the conflict comes not from religious differences but from the differences in Middle Eastern and Western worldviews.