GaeaGenesis: Life and Birth of the Living Earth

In a later article, "The Quest for Gaia," Lovelock wrote:

It appeared to us that the Earth's biosphere was able to control at least the temperature of the Earth's surface and the composition of the atmosphere. Prima facie, the atmosphere looked like a contrivance put together co-operatively by the totality of living systems to carry out certain necessary control functions. This led us to the formulation of the proposition that living matter, the air, the oceans, the land surface were parts of a giant system which was able to control temperature, the composition of the air and sea, the pH of the soil and so on as to be optimum for survival of the biosphere. The system seemed to exhibit the behavior of a single organism, or even a living creature. One having such formidable powers deserved a name to match it; William Golding, the novelist, suggested Gaia -- the name given by the ancient Greeks to their Earth Goddess.

The Gaea Thesis -- a Scientific Perspective

In order to understand the nature of Gaea, we must first understand our own origins. Each of us began our individual life as a single fertilized cell. In the process of its many divisions and multiplications, that cell kept dividing up and redistributing the very same protoplasm. That protoplasm which now courses through all of the several trillion cells of your body is the very same substance that once coursed through the body of that original cell. When a cell reproduces, the mother cell does not remain intact, it divides itself into two new daughter cells. This is why, no matter how many times a cell divides in the process of embryological development, all the daughter cells collectively continue to comprise one single organism. Thus, all life on Earth comprises the body of a single vast living being --Mother Earth Herself: Gaea.

Nearly four billion years ago, life on Earth began with a single living cell containing a replicating molecule of DNA. From that point on, that original cell, the first to develop the capacity for reproduction, divided, redivided, and subdivided its protoplasm into the myriad plants and animals, including ourselves. That same protoplasm shared by all, now makes up all life on Earth.

If life had arisen and evolved spontaneously here, it seems at least possible that many different forms of life would be competing with each other. But in fact we know that all living things have evolved from a single cell which inhabited Earth about three or four billion years ago -- and there don't seem to be any traces of any extinct competitors which arose in different ways . . .

John Seed, a founder of the Rainforest Information Center, says:

. . . the Gaia idea is not an hypothesis, but just the truth in front of everybody's face: the Earth is a single living organism and all the pieces of Earth like ourselves are cells in the living body of the Earth and they are the life support systems.

In his book The Ages of Gaia (1988), Lovelock stated that: "The early reaction, soon after the Gaia hypothesis was introduced in the early 1970s, was ignorance in the literal sense. For the most part the Gaian idea was ignored by professional scientists. It was not until the late 1970s that it was subjected to criticism."

The initial ignoring of Lovelock's work by the scientific community is in marked contrast to the immediate widespread acceptance my writings found in the Neo-Pagan spiritual community, and the enormous impact the idea had in that venue. The introduction of "TheaGenesis" electrified many people and groups, generating volumes of correspondence, lecture tours, interviews, and further articles in various journals. "The effect of ‘TheaGenesis; the Gaea Hypothesis,'"wrote journalist Margot Adler in the first major history of the Neo-Pagan movement, Drawing Down the Moon (1979), ". . . has been extraordinary . . ."

The crucial distinction between my "TheaGenesis" revelation of Gaea and Lovelock's "Gaia Hypothesis" is in the direction of approach. I came to the realization of Gaea from the inside out -- from microbiology, embryology, and paleontology. Lovelock, on the other hand, approached Gaia from the outside in -- from atmospheric biochemistry and systems analysis. Lovelock noted a remarkable homeostasis of Earth's atmospheric composition and surface temperature over the past three billion years, and concluded that this could only be attributed to a biospheric regulatory mechanism.

In Lovelock's "Gaia Hypothesis," Gaia is viewed more as a metaphor or allegory than as an actual entity. This approach posits a Gaian superorganism as a cooperative aggregation or "colony" of discrete components, such as a man-o-war jellyfish. In my "TheaGenesis" approach, the entire evolution of life on Earth is literally the embryology of a single vast living Being -- one replicating continuum of DNA and protoplasm. 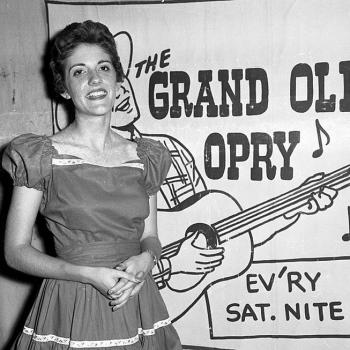 The Devil In The Details Turns Out To Be Jesus
Andrew Hall
About
Get Patheos Newsletters
Get the latest from Patheos by signing up for our newsletters. Try our 3 most popular, or select from our huge collection of unique and thought-provoking newsletters.
From time to time you will also receive Special Offers from our partners that help us make this content free for you. You can opt out of these offers at any time.
see our full list of newsletters