I've known Ari Gold since we were ten. We went to an Orthodox Jewish Yeshiva together. He was my first big crush because he sang jingles for TV commercials and we both loved Madonna, which, in the Orthodox community, automatically made us freaks. And which, as I of course didn't realize at the time, made Ari gay. Flash forward 20 years and I'm working at a magazine called Vice while Ari is a successful, dance-chart-topping, out R&B singer who is inclined to perform topless, greased-up, and in a wrestler's mask, while singing songs with Yiddish lyrics. Like our parents often say, "Oy! Why us? Everyone else grew up normal, why do you have to be so different?" Well, let's find out. 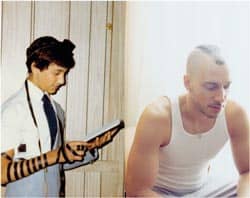 Remember how, in eighth grade, we wanted to hold hands but we couldn't because we were super religious at the time?

Right, we were shomer negiya.

Which is the law that boys and girls can't touch at all -- so we held the ends of a rolled-up paper towel together.

I remember that. I love that there was a whole system in place, like a policing of affection between a man and a woman, but since I'm gay, that's not even where I would be turned on anyway. Like the whole concept of the machitzah in shul [the wall separating men and women in synagogue]. The whole point is so that you're not turned on by the person sitting next to you. How's that supposed to work if you're gay?

One of my coworkers asked me the other day, "What are those strappy things Jews wear when they pray?"

Tefillin. Phylacteries are what they're called in English.

But they were like, "Why?" and I really had no idea. People ask me that kind of stuff all the time.

I kind of know. Want me to tell you?

Well, you put the tefillin around your head and your arm so it points to the heart and it's supposed to represent a complete immersion in prayer -- your mind, your body, and your heart are all focused on prayer.  And that's why we wear leather straps too. But you know, leather straps in an all-male environment, tied tightly around biceps? It's totally hot to me.

You would look at people in high school during prayer?

Who did you think was hot in high school?

Ha! Yeah, he was fairly hunky. So here's the big question: How do you go from being a nice Orthodox Jewish boy to a topless, greased-up, gay R&B singer? And what's more -- unlike me, who has pretty much shunned Orthodox Judaism -- you still use words like mishegas [nonsense] in regular conversation and you wear a chai necklace and you wear tefillin in one of your music videos and there's Jewish lingo in all in your music and stuff. How can you still be involved in Judaism?

Your best friends are all black drag queens and yet you use Yiddish words all the time. Isn't that weird?

First of all, the black drag queens love the Jews and they love all things Jewish, so it only ups my cachet. Also, I didn't hate everything about growing up Jewish, and if I had just completely negated or rejected all of it, then I'd have let them win in a sense. Orthodox Jews don't own it. I mean, this thing is a tradition and a culture that's existed for thousands and thousands of years, but the Orthodox think that they hold the copyright or something. I want to show people that you can be Jewish and you can be gay and you can do both at the same time.

So you still want to be involved in the Jewish community?

I don't want to be involved in the Orthodox community, but when I think about the three things that are running through every part of me, they are being Jewish, growing up in show business, and being gay. Those three things influence everything about me and I can't separate them. I have much more of a nostalgic concept of my childhood than you do. You have completely blocked shit out. I reached a huge pinnacle of my career at age 12, so I have a whole different relationship to my childhood because of that.

Right. Can you give us a quick summary of what you mean when you say you grew up in show business?

I was discovered singing at my brother's bar mitzvah. They put me into a Jewish children's song contest that was sort of like American Idol for Orthodox Jews, and I won first prize. Then, the engineer there was doing this children's story record and asked me to audition, and that was "Pot Belly Bear." Remember "Pot Belly Bear"?