Happily Wed: A Witch and a Christian

As part of our Public Square on Interfaith Marriage, Patheos invited Tanila Price, a practicing Witch, to share with us her personal story of her marriage to a Christian. Here, she shares some of the joys and challenges of being in an interfaith marriage with her husband, Jacques. 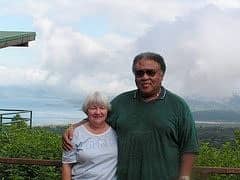 My name is Tanila Price. I live in a suburb of Atlanta, GA. My body will be 60 years old in a few weeks, but my mind is convinced that I am still in my 30s. I was reared mostly by my grandparents in a small town in the foothills of the Appalachian Mountains -- Wedowee, Alabama. They were incredible people -- dowsers and healers. They taught me about living life connected to the Earth and her cycles. I am married to an incredible man, Jacques Price. We have three grown children, lots of grandchildren and great-grandchildren. Our youngest son, Charlie Starr, is a professional musician. His band, Blackberry Smoke, performs all over the world! Our oldest son, Stevens, is a body builder. And our daughter, Jamie is a cosmetologist. I am now a professional grandmother, plus I run a little business from my home -- Mountain Magick.

Where/how did you meet? Did you have initial concerns about dating someone of a different faith? How were those resolved as you decided to pursue the relationship?

I am a retired ER nurse. My husband was, at that time, the National Marketing Director for Fireman's Fund Insurance. He came to the hospital where I worked to help present a corporate liability program to the board. I met him in the cafeteria! The only empty seat was at my table, and he asked if he could sit down. Jacques is from Haiti, and has the most beautiful French accent, and he looked like Laurence Fishburne!! With a combination like that, I was definitely interested! He made it a point to come to the cafeteria each day for the next three days that he was in town. On his last day there, he asked for my phone number, and it went from there.

We dated for several months and then it became evident that our relationship was becoming serious. I figured that it would be best to mention to him that I was a Witch. Being reared in Haiti, Jacques had been exposed to the Pagan religion, Voodou. Even though he is a Christian, and he was initially a little shocked, he listened to what I believed. He watched me do ritual, and even joined me in doing them. He realized that we are reaching to the same end; we just are taking different paths. As the years have passed, he has seen the depth of my beliefs. He knows that what I believe isn't just a fad or passing fancy. I am just your average little old lady who just happens to practice the Craft.

How did your families respond? What/if any concerns did your parents or family members have?

Neither side of the family had any problem with the faith of either of us. As my husband is black, and I am white, that probably caused a bit more consternation than religion.

Finding the similarities is one of the greatest joys, but also, occasionally a challenge. I am not very comfortable in a "church" setting. My husband has become very open to my belief that we can find the Creator in the world around us. We do go to an occasional church service, but I think he is finding of his own volition that there is just as great a joy in Nature. He has helped me build a Medicine Wheel in our yard, and he helps me hang ribbons on a tree at Beltane. I, in turn, attend services at any church of his choosing when he wishes. We try to respect each other and the way that we reach out to the Creator of life.

He helps me celebrate the Sabbats, and I attend special services at a church with him. Respect and love for each other allows us to do this.

If you have children, how do you raise them within a multi-faith household? How have the kids responded? How do you approach disagreements over child rearing?

Our daughter is a Christian, but she will call me to light candles, and do energy work for her and her family. Our sons are both quite metaphysical in their leanings. Again, I think mutual respect and love for each other allows us to face head on any disagreements that arise. We have taught the kids that the Creator is all around them. I suppose that Jacques has left most of the "religious" training to me.

Where do you notice your faith "difference" the most? The least?

I would suppose that at first, the biggest difference was attending church itself.  I feel that as long as Jacques doesn't try to minimize what I believe, I will afford him the same.

Article Continued On Next Page
Page: 1 of 2
4/29/2010 4:00:00 AM
About Kevin Juhasz
Kevin Juhasz is a content manager with a Colorado-based marketing company and the owner of <a href="https://www.thewritecontent.net/about">The Write Content</a>, which provides writing and editing services. He has more than 25 years of writing and editing experience with websites, newspapers, magazines, trade publications and more. Kevin has covered news, sports, entertainment, technology and a wide variety of other subjects.