The Holy Twosome: Gays and Paganism 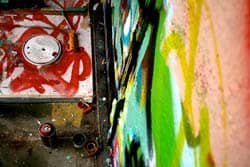 I have actually been trying to write an article about being a gay pagan for a few months now. Toying with ideas and themes, I couldn't ever quite find what angle I felt best described the nature of being both gay and pagan and how it affected my life. And the more I thought about it, the more confused I became, which should be rather odd, because I am both of those things: gay and pagan.

The most obvious place to begin, I thought, was -- as with most things dealing with modern paganism -- Gerald Gardner. The founder of Wicca fused several different types of magical practice and religious philosophies to create a religion that worshipped a Goddess and her consort, the God. It has been stated by many that Gardner detested gay people, as being gay goes against the natural order of things. Lois Bourne, one of the High Priestesses of the Bricket Wood coven stated:

Gerald was homophobic. He had a deep hatred and detestation of homosexuality, which he regarded as a disgusting perversion and a flagrant transgression of natural law. . . ‘There are no homosexual witches, and it is not possible to be a homosexual and a witch,' Gerald almost shouted. No one argued with him.

However, there are some who say his views of homosexuality softened as he got older, and either way it goes, Gardner's creation eventually evolved into being one of the most gender-inclusive religions on the planet. As more priests and priestesses took the reins, and as more covens have been created, books written, and younger generations involved, Wicca has become accepting of all people despite their color, creed, orientation, gender identity, ethnicity, or shoe size.

Despite this, there is still the problem of deity. Wicca is set up as a true fertility religion, in the sense of human fertility. There is a male God who is always male, and a female Goddess who is always female. They copulate and create everything. How is a gay man or woman to identify with this great union of divine forces? How am I to relate to the Goddess and God in the sense of fertility, which is the heart of earth-worship?I found I could answer these questions rather simply: I'm not Wiccan. Nope. Never have been, and most likely never will be. I don't have anything against the religion, but it just doesn't seem to suit me. Though, I do like the idea of the duality of the divine. It seems to fit. For everything in the world there is both an equal and opposite thing. For matter, there is anti-matter. Life, death, love, and heartache. Everything has a pair, and I believe this to be the case with deity. But, as I've said in the past, it doesn't mean that the God and Goddess are wholly male or female, or even the opposite at the same time.

Being non-Wiccan, I don't view the holy twosome as a divine penis and a divine vagina. They're not just fertility and copulation, though they bring those things about as well. They are the epitome of duality, and as is the true nature of duality, both must be both at some point. So one part of divinity is male and the other is female for fertility, but They might both be female at some point or male or neither. The problem with the anthropomorphism of the Divine is that they are not human. It's easier for us to assign them human characteristics, such as gender, because that's what we are, and we think God (dess) should be just like us.

But, even if the God and Goddess were male and female all the time, it wouldn't be difficult for me to relate to them. I took 7th grade science. I am fully aware that the guy's swimmers run up the rabbit hole to find the Cadbury egg. I get it. When a man and a woman really love each other, or have too much tequila, nine months later a stork flies in on Dumbo and drops a baby down the chimney. Or . . . something like that. It takes absolutely nothing away from the act of Divine Creation if I do not fertilize an egg myself.

I can create in a myriad different ways. I can paint and write and sculpt and create loving relationships and make fantastic meals and every spring I can plant seeds and every fall I can reap a harvest. Believe me, I can create just as well as any high school quarterback and head cheerleader in the back of a '97 Ford. Creation of a human child is just one method of creation.

To look at the idea on an even more superficial level, when I am asked a question such as, "What's it like being a gay pagan?" or "How does being gay affect your spiritual practice?" I suppose I could be asked the same thing about being blonde. "So, does being really tall make it easier to see the Goddess because you're closer to Heaven, or harder because you're farther from the earth?" Being gay is just a characteristic. It's the huge nose on my face that's been there since I was born and will be there on my deathbed. It's a part of me I've never questioned, though I may not have wanted it at times.

And as for the deeper spiritual practices, sometimes called the Mysteries, those don't bother me either. Sure, I may not get to go through all the stages of the mysteries, but I'm not really sure everyone always gets to go through every single stage. And, again, it doesn't take anything away from the Feminine Mysteries because half the population can't know them, and vice versa for the Masculine Mysteries. They are both equally adequate for teaching and learning, and utterly inadequate as we attempt to label an infinitely complex dichotomy.

So, to answer the question out there -- should you find yourself on either end of it -- being a gay pagan has its drawbacks and its perks. For one thing, I most likely won't be involved in the fertility rites in a physical manner, which is great because I wouldn't know what to do anyway. On the other hand, I don't have to go to classes or workshops to learn the ‘mysteries' of men or women. I've got the absolute best of both worlds! I'm already a guy, and I have enough girl friends that I'm already privy to the inner workings of that dark, dangerous place we call the female mind. But, best of all, my over-the-top pagan jewelry and garb can be guaranteed to be better than yours. It is. Don't fight it. The gays have the dressing good thing down to a science.


This article first appeared on Witchvox and is reprinted with permission.

Fire Lyte lives in Illinois and works in the court services system. He contributes frequently to Witchvox and blogs at Inciting a Riot.  If you enjoyed this article by Fire Lyte, check out his podcast or Examiner page.