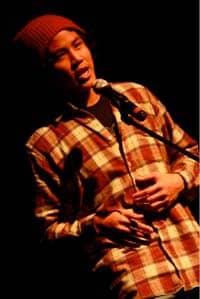 Chris Tse's "I'm Sorry I'm a Christian," captured on video at the Vancouver Poetry Slam in 2009 (an event he won), has stirred conversation and controversy among Christians online.  Some have objected to the language or the title or what might seem like an unsympathetic portrayal of Christians and what they have done in ancient and recent history.  Others have been encouraged to find another believer who affirms his Christian identity even as he acknowledges all the sins done in Christ's name.

According to Marty Duren, "Chris Tse's poem reveals what is beating at the heart of many high school and college aged believers. They look at history, including their own context, and just see far too much done in the name of Jesus that seems devoid of His fingerprints. Too much of the movement that Jesus started with His own death and resurrection has been, over time, hijacked by professionalism, modernism, nationalism, fundamentalist certainty and liberal ambiguity. Even when they cannot put words to it they know something is amiss."

See the video below (language warning):

When I approached Chris, he was not aware of the discussion his poem had stirred up.  For all the controversy (see the comments at Carlos Whittaker's Ragamuffin Soul), however, little has been known about the poet behind the poem.

Chris Tse is a third-year journalism student at Carleton University in Ottawa with a passion for Jesus Christ, a love for sports, and a rare talent for performative poetry.  Growing up in a Christian home, with parents who immigrated from Asia, he was trained in the scriptures and active in Awana and the Christian Service Brigade.  At the age of fourteen, when he determined that he would take his faith seriously, he began to find himself in tension with the conservative Chinese-American church his family attended.  With his family's support, he explored other churches and sought a form of the faith that felt authentic.

"I was really different from the other kids, who were still your good Sunday School kids, while I was blossoming into some sort of Christian freedom fighter.  Looking back, I'm not proud of some of the things I did in the name of the faith.  I was a passionate, over-zealous high school kid.  I would graffiti transit buses with the name of Jesus.  I did some dumb stuff."

In his final year at home, however, he "came back to what the message was."  As he says, "I realized that it wasn't up to me to judge what my friends at church were doing, and my school friends and my parents and their friends and the elders at church.  We all have the same vision.  We just have different means of getting there.  I embraced that there are differences of opinion and approach.  I tried to simplify my faith and remember what the gospel is all about.  Our faith is named after Christ.  So I try to keep my focus on Jesus.

Now a member of the Navigators fellowship at Carleton University, Chris serves as a student leader for the fellowship, leads a small group, and leads worship.  He was interviewed by Timothy Dalrymple.

Your performance at the Vancouver Poetry Slam, just as a performance, is impressive.

Do you see slam poetry as a part of your calling from God?

Poetry is definitely a big part of my life.  I've always been inclined toward writing.  I started doing slams two years ago, and I've experienced an enormous amount of success.  I'm doing shows for lots of people and I'm well paid for it.  It's essentially a part-time job.

I found that it's something I am naturally good at.  The first slam I went to, I got second place.  I'm on the stage now twice a week.