The Jewish Body: A Book Review

By Sherwin B. Nuland 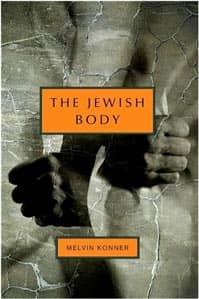 Melvin Konner of Emory University is one of America's most distinguished anthropologists, whose talents include the ability to make himself easily and enjoyably understood by readers with no background in his area of expertise. He also teaches in the university's human biology and Jewish studies programs. When a scholar with such qualifications focuses his attention on a theme as potentially amorphous as The Jewish Body, we can anticipate a perspective that allows him to roam over a wide and rich territory of sociological, biological, and historic turf. At the same time, we can also expect that he will give form to his large subject.

Konner lays out his plan at the outset: "It is my goal in this book not only to trace the Jewish body through its radical, almost magical transformations, but to try to understand how Jewish bodies and Jewish thoughts about them have shaped the Jewish mind and Jewish contributions to civilization." This is precisely what he does and more, enlightening his readers on the matter of that body as seen by non-Jews and the effect on the Jewish self-image.

The Jews, Konner points out, introduced to the ancient world the notion of a God without a body, so different from the conceptions of deities held by the various peoples among whom they lived. With that idea came the belief that their own bodies must be treated in highly specific ways, so as to maintain their purity. How ironic then that so many of their later antagonists, particularly Christians, should see them as ugly contaminants on their own pristine civilizations. Since the dawn of recorded time, the Jewish body has been a target of contempt on which the animosities of other groups have been focused.

Observant Jews have always lived by strict laws dictating what can be put into their bodies, but Konner reminds us that their notions of purity hardly end there: Jews even go so far as to recite a blessing over the contents of what leaves the body. And they have rules about menstrual blood and surprisingly liberal attitudes toward conjugal sexuality, whose underlying purpose is to encourage marital relationships that lead toward a birth rate that will sustain or increase the population. Nevertheless, today, Konner points out, for every 100 Jewish deaths, there are 85 births, causing a "demographic crisis" that should be promptly addressed. The statistics are stark. "Jewish numbers are barely where they were before the Holocaust, and they are not growing," he warns. Among his suggestions are: "A birth-control buyback program for monogamous married couples? A serious money prize for the third and more for the fourth, fifth, and sixth babies? Free Viagra?"

Jews celebrate the holy covenant with their God by maintaining their personal cleanliness with all manner of ceremonies and rituals, including circumcision, hand-washing, and ritual baths. But no degree of purity could undo the fact of Jewishness that led many gentiles to see them as deformed and contaminated.

After all, did they not have a propensity toward misshapen, frequently hooked noses and other features equally unattractive to their own and gentile eyes? Did their inclination to study the esoterica of sacred texts to the exclusion of physical activity not enervate them and bend their backs? Christian communities made ever more repulsive the Jew of caricature, until the Jew of reality actually began to see himself in that image. Konner draws an image not only of physical but also of moral ugliness, a weak body, and a cowardly, treacherous disposition.

Should the weakness somehow be transcended, in modern times it would often be in the form of the prizefighter whose victories in the ring were celebrated by his co-religionists as proof that even in the midst of accusations and realities, the Jewish body and spirit could rise to acts of heroism that were universally admired. How much more powerful was this brave image when added to it was the figure of a pugilist who was also a war hero, like the celebrated Barney Ross, born Beryl David Rosofsky? Those of us old enough to remember Ross will also remember the avidity with which we followed his many bouts in the ring, the tales of his battlefield exploits and our relief when he overcame the drug habit that had resulted from the treatment of his war wounds. Konner proudly adds his name to those of forty other Jewish men who wore championship belts, more than a few with the Star of David emblazoned on their boxing trunks and robes.

We read about such eminences in a chapter entitled "Tough Jews," which also includes descriptions of the pimps, gangsters, and murderers who rose from a people who for centuries were taught to eschew sin, violence, and crime. There is no pride to be found in reading names such as Arnold Rothstein, Dutch Schultz, Meyer Lansky, Bugsy Siegel, and the C.E.O. of Murder Incorporated, Louis "Lepke" Buchalter. Their toughness hardly made up for the grist they added to the mill of disreputable qualities associated with Jews everywhere.