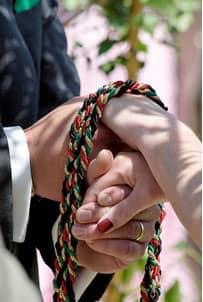 When we practice sympathetic magic, the principle of "like attracts like" is the foundation we build on to get results. So why wouldn't we apply that principle of sympathetic magic to our relationships? In this context, I think we are primarily talking about the difference between a Christian and a Wiccan partner. Since Christianity is the majority religion in this country, and Wicca is the largest of all the Pagan religions, these two religions will turn up most frequently in the discussion of difficulties about mixed faith marriages. These are also the two in which I have experience.

Interfaith relationships can be more difficult for Wiccans and other Pagans, for the simple reason that, to begin with, we are only a small portion of the whole society. That means that our pool of available partners is smaller, yet the challenges of forming a lasting relationship are the same challenges that everyone else faces. Even so, as a person who was committed to his path before he got married, I had a non-negotiable requirement that my wife also had to be Wiccan. My wife and I had a handfasting ritual with just our coven members present, and then the following year had a legal marriage for tax purposes. We now lead our coven together.

Prior to this, I had two live-in relationships with other women, but in both cases, those women were unwilling to embrace Wicca as their spiritual path, even though they were intellectually curious about it and liked various aspects of its philosophy. In both cases, when the discussion revealed this important stumbling block, those relationships ended.

My observation of fellow coven members reveals a few distinct patterns when we look at people who are part of a mixed faith couple. On the one hand there are those who have a partner who just does not care what they do, and those members attend meetings and rituals, in some cases, for years. Their partners do not want to join, but they will not interfere. On the other hand, there are those whose partners actively oppose it. That usually forces them to drop out. Sometimes the partner's opposition takes subtle forms, like insisting that a family vacation or visit with relatives be scheduled at exactly the same time as a sabbat, even though we set the schedule of sabbat dates at the beginning of each year for the next eight turns of the wheel. Or he repeatedly creates some minor crisis that demands attention, just when the spouse is heading for a coven meeting.

Sometimes the opposition is more overt. In one case, a female student who was eager to learn and readily understood and embraced the practice came to me one evening after a class and told me that her husband was unhappy with the fact that she was studying Wicca. She asked me to meet with him. I did, and answered all of his questions. They were the typical Christian misconceptions. No matter what I said, he still felt that he and his wife were doomed to hell if he let her go on with this. I never heard from her again after that.

Then there was a male student whose wife was a Christian who objected to his practice. He continued to come to all the meetings and rituals anyway, over her objections. However, she kept the pressure up. She forbade him to do any rituals of his own at home or display any tools, art, or other signs of his path. So he had to stay in the closet in his own home, even though he owned half of it. Eventually, the pressure from his wife caused him to drop out of the coven.

I absolutely cannot conceive of a spouse or partner forbidding me to practice the religion of my choice. This is as legitimate a grounds for divorce as any other I can name. I have known some people who did divorce as their commitment to Wicca became stronger and the Christian partners continued to object.

There is one other option that could occur. If a couple has no particularly strong religious affiliation and one partner takes up the practice of Wicca and the other partner is favorably impressed with what they see, they may begin to discuss the subject or ask to observe or participate in a ritual or working of some kind. If they have a favorable experience and become more intrigued, the other partner could decide that they are also interested and they become a couple that practices together. The power of attraction will only have a chance to work though, if the other partner is open-minded and willing to consider something new. I have never seen a case where the other partner is adamantly opposed to Wicca and suddenly has a change of mind and decides that they will give up their previous religion to take up Wicca. The percentage of Americans who say they are Christian when they are responding to a survey but do not regularly attend a church are the portion of the population where this scenario would most likely occur.