Marrying Outside the Box 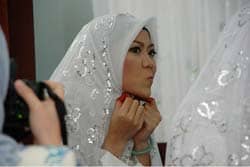 "It is not allowed under any circumstances for a Christian man to marry a Muslim woman. It is not acceptable." These words belong to Dr. Hojjat Ramzy, a trustee at the Muslim Iqra School in Oxford, as reported by the Oxford Times. Dr. Ramzy's comments appear in a story highlighting the glimmer of hope Muslim women have who wish to have an Islamic marriage with a non-Muslim. The story focuses on Dr. Taj Hargey, chairman of the Muslim Education Centre of Oxford, who is one of very few imams willing to perform Islamic marriages for Muslim women who choose to marry non-Muslim men.

Dr. Ramzy, however, is in the majority in his opposition to interfaith marriages for Muslim women. The consensus on the issue of interfaith marriages involving Muslim women appears to be that the practice is strictly forbidden. Men, on the other hand, can marry Christian or Jewish (considered "People of the Book" in Islam) women. However, given the realities of the burgeoning global Muslim community, particularly Muslims living in the West or alongside a plurality of other faiths, this issue has presented itself on numerous instances and the consensus in response to this dilemma deserves a critical look. Is this "consensus" based on religious doctrine or is it a knee-jerk response based on something else?

Admittedly, this issue is particularly relevant to me as a single Muslim woman. There was a time in my life when I thought I would be swept away by my one true (and Muslim) love. Being brought up on Bollywood movies can give a girl some less than pragmatic ideas about romance. Nonetheless, my Bollywood hero was always Muslim because I thought Islam required him to be. However, it wasn't until I began dating that I realized the difficulties this "requirement" posed for me, as well as for other Muslim women like myself. I only dated Muslim men in a bid to ensure I ended up with a Muslim man. None of those relationships worked out. Some came very close, others were doomed from the beginning, but all were sincere.

However, after studying what the Qur'an explicitly states on this issue, I have decided to change my stance. I will no longer consider only Muslim men, but will be open to meeting men of other religions. And as can be seen from the Oxford Times story, I am not the only Muslim woman considering non-Muslim men as potential partners.

Adherents of this consensus will no doubt say, "This is forbidden! A Muslim woman cannot marry a non-Muslim man!" I say, "Prove it!" I realize my challenge comes across as rude and perhaps even blasphemous to some, but it is a sincere response that asks to study the issue critically and objectively. Where in the Qur'an is it explicitly written that Muslim women cannot marry outside the religion?

I am not a theologian by any stretch of the imagination but I have made it a habit to critically analyze information presented to me, and so I meticulously read the Qur'an and its various interpretations and evaluate which makes the most sense to me. In my research I have come to realize that this prohibition placed on Muslim women is simply a result of the omission of permission in the Qur'an. In other words, the Qur'an explicitly states that Muslim men can marry Women of the Book but makes no such statement for Muslim women, which many scholars have assumed to imply that women must not be allowed to marry Men of the Book.

Islamic law scholar Dr. Abou El Fadl believes this statement is based on weak evidence. An alternate interpretation, of course, would be that the permission given to Muslim men could be directed toward women as well. As a community, we need to adopt the habit of scrutinizing these issues critically and demanding more nuanced and detailed responses from our clerics and religious scholars than a mere Q&A where incomplete or poorly researched answers are accepted as law.

I can understand the need for this interpretation in a time when women relied primarily on men for support, and there were fears of diluting and weakening a relatively new community. However, such interpretations do not necessarily apply to all places and times. Today, the two main traditional justifications for forbidding such unions have become irrelevant to the realities of modern Muslim women. It is said that if a Muslim woman marries a non-Muslim man she may be forced to leave Islam, but the reality for many Muslim women is that they have no fear of such coerced conversions. It is said that children of Muslims must adhere to the religion of the father, which would make the children of these Muslim women non-Muslim, but the Qur'an does not state that children must follow the religion of the father. The children of Muslim women and non-Muslim men can be raised as practicing Muslims. Although difficult, these issues can and should be negotiated by the couple themselves, not dictated by questionable interpretations.